Five International Space Station crewmates were reunited on stage at Space Center Houston Thursday, Oct. 13, to receive honors for their missions and share their appreciation for the support they received before, during, and after their flights.

Each astronaut received the NASA Distinguished Service Medal and the NASA Space Exploration Medal in a ceremony formally recognizing the crew, flight directors, and key contributors to their mission’s success. Since returning from a long-duration mission aboard the orbiting laboratory, the crewmates have returned to their hometowns, shared their mission with the public, and contributed to further scientific investigations and post-mission research.

The crew shared their personal stories of being “the happiest crew ever aboard the International Space Station,” according to Barron, as they narrated video highlights. Space Center Houston President and CEO William Harris hosted a question-and-answer session with the crew and invited audience questions.

“Man we want to go back so bad,” said Chari as they provided insight into living in space for long periods of time.

Breaking the American single-mission duration record, Vande Hei’s time on the space station spanned nearly a year on Expeditions 64, 65, and 66. Supporting NASA’s goals for future human landings on the Moon, Vande Hei completed approximately 5,680 orbits of the Earth and a journey of more than 150 million miles, roughly the equivalent of 312 trips to the Moon and back. He witnessed the arrival of 15 visiting spacecraft and new modules and the departure of 14 visiting spacecraft.

Vande Hei launched April 9, 2021, alongside Russian cosmonauts Oleg Novitskiy and Pyotr Dubrov. His second journey into space of 355 days is the longest single spaceflight by a U.S. astronaut, previously held at 340 days, and gives him a lifetime total of 523 days in space.

His Expedition 66 crewmates joined him onboard in November 2021. It was the third flight of a NASA-certified commercial human spacecraft flown as part of the agency’s Commercial Crew Program. The astronauts traveled 75,060,792 statute miles during their 177 days in orbit (175 of which were spent aboard the station). They completed 2,832 orbits around Earth and splashed down in May 2022.

While working in the orbiting national laboratory, the expedition crew spent many hours on scientific activities and technical demonstrations, conducting everything from plant research to physical sciences studies.

Research aboard the space station built on previous work investigating how fibers grow in microgravity, used hydroponic and aeroponic techniques to grow plants without soil or other growth material, captured imagery of their retinas as part of an investigation that could detect eye changes of astronauts in space automatically in the future, and performed a demonstration of technology that provides measurements of biological indicators related to disease and infection, among many other scientific investigations. The astronauts took hundreds of photos of Earth as part of the Crew Earth Observation investigation, one of the longest-running investigations aboard the space station, which helps track natural disasters and changes to our home planet.

Stay current on space station activities by following @space_station and @ISS_Research on Twitter, as well as the station Facebook and Instagram accounts and the space station blog.

See photos from the event here: 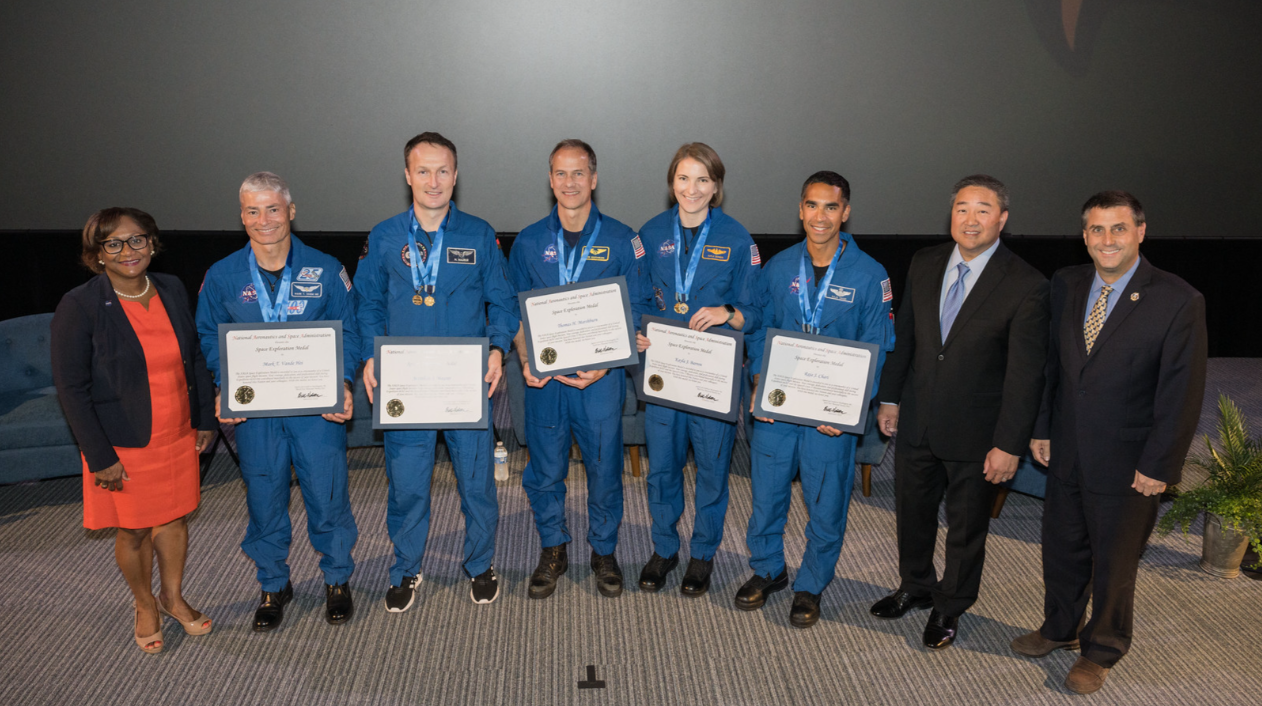 This is NASA’s highest form of recognition that is awarded to any government employee who, by distinguished service, ability, or vision, has personally contributed to NASA’s advancement of United States’ interests. The individual’s achievement or contribution must demonstrate a level of excellence that has made a profound or indelible impact on NASA mission success and, therefore, the contribution is so extraordinary that other forms of recognition by NASA would be inadequate. Honorees are recognized at an agencywide honor award ceremony.

This is NASA’s highest form of recognition that is awarded to non-government individuals, or to an individual who was not a government employee during the period in which the service was performed, whose distinguished service, ability, or vision has personally contributed to NASA’s advancement of United States’ interests. The individual’s achievement or contribution must demonstrate a level of excellence that has made a profound or indelible impact to NASA mission success and, therefore, the contribution is so extraordinary that other forms of recognition by NASA would be inadequate.

This prestigious NASA medal is awarded to any government employees for notable leadership accomplishments that have significantly influenced the NASA mission. Sustained leadership and exceptionally high-impact leadership achievements should demonstrate the individual’s effectiveness in advancing the agency’s goals and image in present and future terms.

This prestigious NASA medal is awarded to any government employee for sustained performance that embodies multiple contributions that contribute to NASA projects, programs, or initiatives.

Space Exploration Medal
Presented to astronauts for completion of a U.S. spaceflight mission 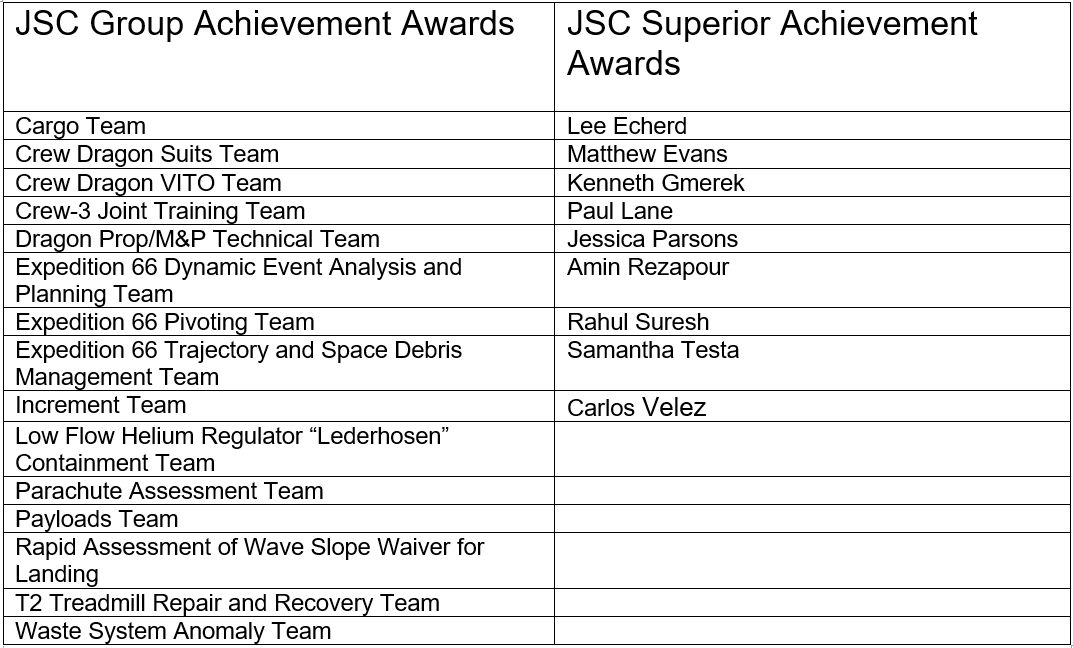 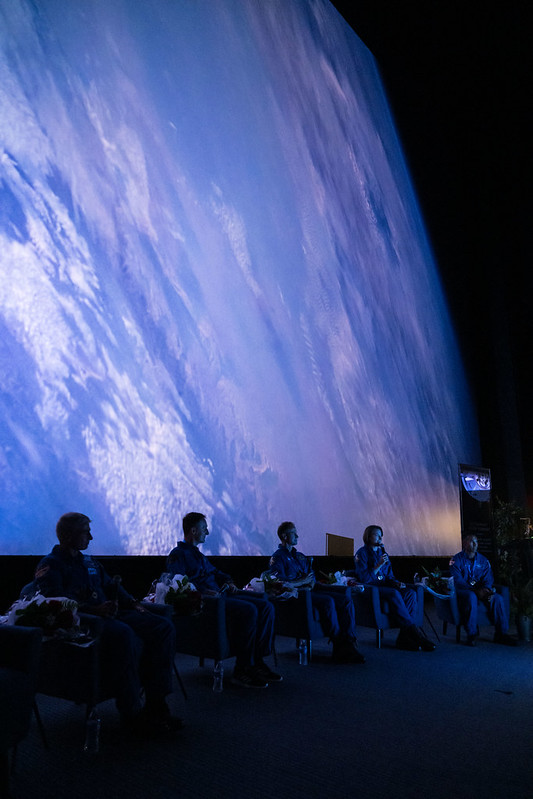