Building on a Mission: The Project Management Building, Home to the Center’s Directors – Part 5

Building on a Mission: The Project Management Building, Home to the Center’s Directors – Part 5

This series of articles features the 13 unique individuals who have led NASA’s Johnson Space Center in Houston during the past 60 years and continue to lead us into the future of human space exploration. The first four installments described the Project Management Building and the center’s first seven directors through 2001. This article, covering the period from 2001 to 2005, focuses on JSC’s eighth and ninth directors — Roy S. Estess and Jefferson D. Howell – as they led the center at the start of the new millennium. In addition to making high-level decisions to maintain America’s leadership in human spaceflight, the center directors’ many varied activities included greeting astronauts after their returns from space, dedicating new facilities, and meeting with local politicians, world leaders, and celebrities. For more information about the directors who led the center, please visit Johnson Space Center Directors | NASA. 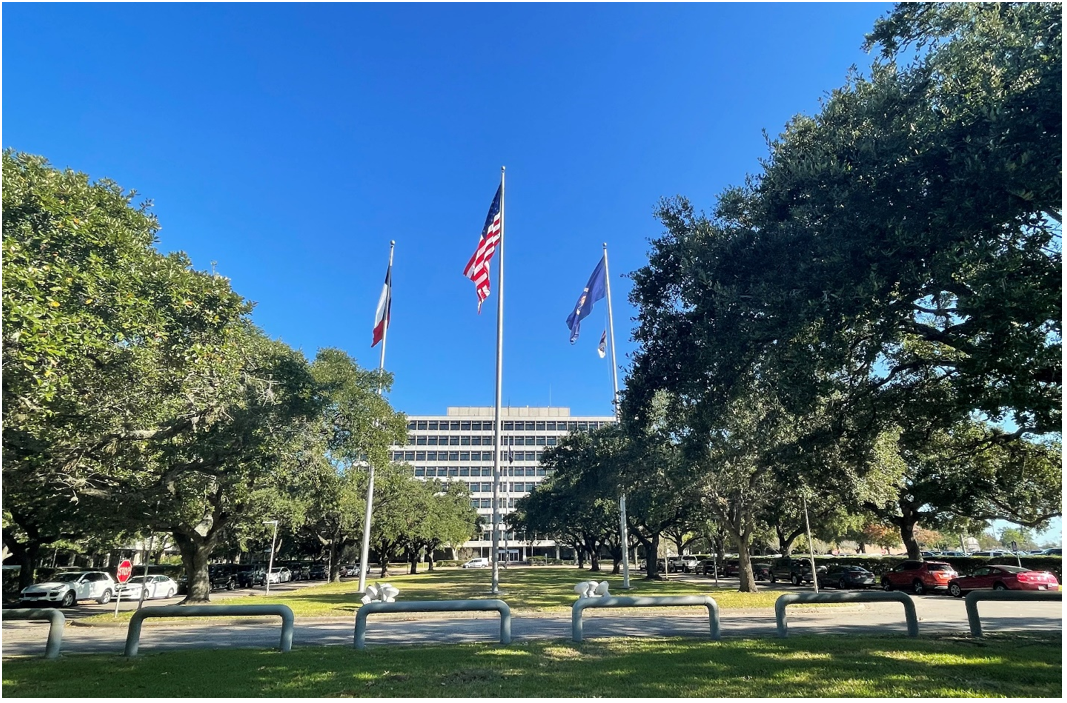 The Project Management Building, known today as Building 1, with its four flagpoles, at NASA’s Johnson Space Center in Houston in November 2021. Credits: NASA

Roy Estess graduated from Mississippi State University with a degree in aerospace engineering. In 1966, he joined NASA’s Mississippi Test Facility, now NASA’s John C. Stennis Space Center in Mississippi, as an Apollo program engine quality control engineer working on the Saturn V rocket’s second stage. In 1980, he was named as the deputy director of the facility, then known as the National Space Transportation Laboratories, serving in that capacity until 1989, when he became director of Stennis.

During Estess’ tenure as acting director, assembly of the International Space Station continued with the addition of the Canadian-built remote manipulator system robotic arm, the Quest Joint Airlock, and the Pirs docking compartment. The addition of the latter two elements provided the station with spacewalking capabilities from the American and Russian segments without the need to have a space shuttle docked. Long-duration crew members completed the first three crew exchanges to maintain a continuous presence in space. Five of the space shuttle missions flown during this time were dedicated to station assembly, while the sixth completed a repair and refurbishment of the Hubble Space Telescope. During this time, astronauts and cosmonauts completed a then-record 21 spacewalks.

Left: The International Space Station photographed by the STS-108 crew in December 2001, showing the Canadian-built Remote Manipulator System, at bottom, the U.S.-built Quest Joint Airlock just above it, and the Russian-built Pirs docking compartment and airlock — the three elements added to the growing facility during the tenure of Acting Johnson Director Roy S. Estess. Right: Estess speaks at the welcome home ceremony for the STS-109 crew at Ellington Field in March 2002. Credits: NASA

When NASA Administrator Sean O’Keefe named a permanent Johnson director effective in April 2002, Estess returned to his position as Stennis’ director. He retired from NASA on Aug. 25, 2002, and Parsons succeeded him as Stennis’ director. In 2003, Estess received the prestigious National Space Trophy from the Rotary National Award for Space Achievement Foundation in recognition of his contributions during his 37-year career at NASA. He died on June 25, 2010, at age 71.

After a 37-year career in the United States Marine Corps, Jefferson D. Howell, known by his nickname “Beak,” retired as a lieutenant general. He came to JSC in 1999 as a program manager for the Science Applications International Corporation (SAIC), a support contractor for the Safety, Reliability, and Quality Assurance organization. He worked there for three years until selected as Johnson’s next director.

The tragic loss of Space Shuttle Columbia and its seven-member crew dealt a great blow to the NASA family, especially the JSC community. As center director, Howell’s leadership saw employees through the period of mourning and recovery efforts, subsequent investigation into the causes of the accident, and enabled Johnson to continue the important work of human spaceflight. Although the space shuttle fleet remained grounded for 29 months, crews continued to live and work aboard the space station. The international partnership responded by reducing the resident crew size from three to two, as Russia continued to resupply the facility and perform crew rotations. 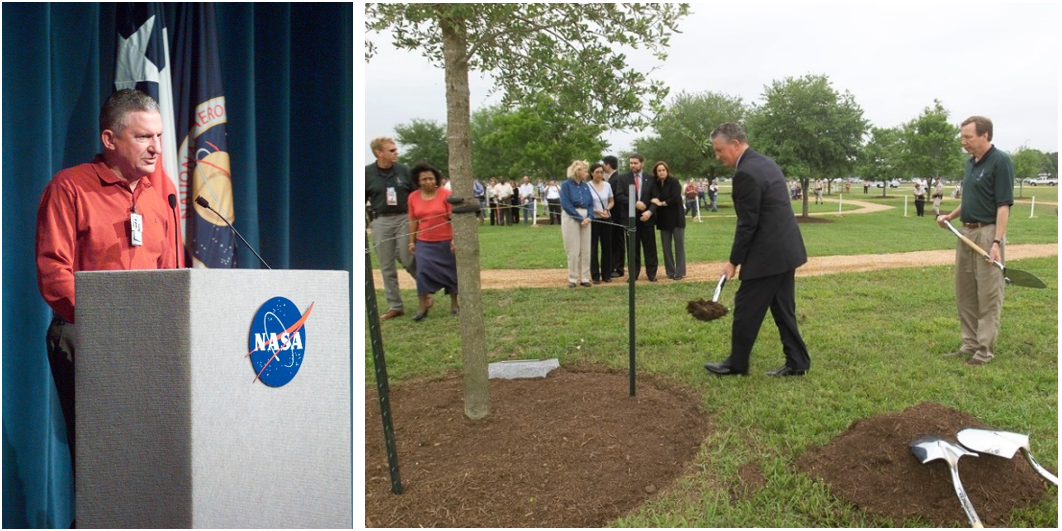 Following the retirement of Space Shuttle Program manager Ronald D. Dittemore on April 23, 2003, on May 9 NASA named Stennis director and former Johnson deputy director Parsons as his successor. In July, Parsons named N. Wayne Hale, manager of launch integration at NASA’s Kennedy Space Center in Florida, as his acting deputy. They led the team that implemented the recommendations of the Columbia Accident Investigation Board, or CAIB, to safely return the space shuttle to flight. Howell led the center in making the cultural and management changes recommended by the CAIB, such as the establishment of the Joint Leadership Team made up of senior members from NASA and its contractors.

Left: In May 2003, Johnson Director Jefferson D. Howell, right, at the groundbreaking of the visitors pavilion for the Longhorn Project, with former Johnson director George W.S. Abbey, second from left. Right: On July 1, 2003, In the Mission Control Center, Howell, seated second from right, joins in the birthday celebration for astronaut Ed Lu aboard the space station. Credits: NASA

On Jan. 14, 2004, President George W. Bush announced the Vision for Space Exploration, or VSE. Partly in response to the Columbia accident, the vision sought to implement a sustainable and affordable plan to extend human presence beyond low-Earth orbit. Its major points included returning the space shuttle to flight to finish assembly of the space station by 2010, then retiring the space shuttle and replacing it with a new Crew Exploration Vehicle, named Orion, in August 2006. This would lead to a return of humans to the Moon and, ultimately, a human expedition to Mars. Howell led Johnson in meeting the challenges of implementing the VSE, including the establishment of the Constellation program in October 2005 and leading the development of the Orion crew vehicle. In other management changes, following Stone’s retirement, in March 2004 Howell named Director of Flight Crew Operations Cabana as Johnson’s deputy center director. Cabana served in that position until October 2007, when he became director of Stennis.

To maintain a cadre to support future space shuttle, space station, and exploration missions, NASA selected a new group of astronaut candidates, announcing the Class of 2004 on May 6. The group included 11 U.S. candidates, including three educator astronauts to continue the work begun by teacher S. Christa McAuliffe, lost in the January 1986 Challenger accident, and three candidates from the Japan Aerospace Exploration Agency. Two major programs at Johnson underwent management transitions, while the third new program received its first manager.

On May 12, NASA named Michael T. Suffredini as the deputy International Space Station program manager. In August 2005, when Gerstenmaier became the associate administrator for human spaceflight at NASA Headquarters in Washington, D.C., Suffredini succeeded him as program manager. On Sept. 20, 2005, Parsons resumed his position as director at Stennis, and Hale became Space Shuttle Program manager. On Nov. 1, NASA named director of Johnson’s Flight Director Office Jeffrey M. Hanley as the first manager of the Constellation program, with future Johnson director Mark S. Geyer as his deputy.

With the retirement of the space shuttle planned for 2010, NASA sought alternate means to transport cargo and, ultimately, crews to the space station, including the use of commercial entities. On May 23, 2005, NASA took one of the first steps in that direction with the signing of a Space Act Agreement with Space Exploration Technologies Corporation, commonly known as SpaceX, of Hawthorne, California, to research strategies for future human spaceflight systems. Howell signed the agreement with SpaceX CEO Elon Musk. Howell, a strong advocate of education and outreach, partnered in April 2005 with the Houston Zoo to establish a breeding facility for the endangered Attwater prairie chicken. Howell said that “the JSC team is excited about this partnership. Part of NASA’s is to understand and protect our home planet, and we are happy to play a small part in preserving the Attwater prairie chicken.”

Although he had left the center by the time the facility opened, he cut the ribbon at its dedication in August 2006. In another arrangement with the Houston Zoo, Johnson established a grove of eucalyptus trees to provide a stable supply for their koalas.

On Oct. 3, 2005, Howell announced his intention to leave his position as director of Johnson to join the Lyndon B. Johnson School of Public Affairs at the University of Texas in Austin. He stayed on until NASA Administrator Michael D. Griffin named Michael L. Coats as his successor on Nov. 7. Two days later, in one of his last official acts as center director, Howell officiated at the ribbon cutting of Building 27, the new Astronaut Quarantine Facility. Two weeks later, colleagues and friends threw Howell a retirement party at Space Center Houston. He continues to maintain strong ties to the Johnson community.

The next installment in this series will cover Johnson’s next two directors, who oversaw the completion of the space station, the retirement of the space shuttle, and new directions for future space exploration.