Science from the shadows

Science from the shadows

While most people in North America will be viewing the astronomical event of 2017—a total solar eclipse—from the comfort of hard earth, a team from NASA Johnson Space Center’s Aircraft Operations Division will get an even more stunning visual from the stratosphere aboard two high-altitude research aircraft—NASA’s WB-57s. And, using a flight path over Missouri, Illinois and Tennessee, their eclipse will last more than seven minutes, rather than everyone else’s two-and-a-half minutes.

“The aircraft will be flying at 50,000 feet, which will put them above the majority of the Earth’s atmosphere and improve image quality,” said Charles Mallini, WB-57 program manager. “By flying one aircraft 50 miles behind the other, they can extend the total observation close to seven minutes of solar eclipse ‘totality’ time. When one plane begins to leave totality, the other airplane begins to enter totality.”

The high-flying planes, which are no strangers to unique missions, will be gathering very precise observational data. Specifically, specially designed twin telescopes mounted to the nose of the planes will gather the clearest images of the sun’s outer atmosphere—the corona—that have ever been recorded, as well as thermally map the planet Mercury.

To get the information that will drive the science, the planes were upgraded with Airborne Imaging and Recording System/Day Night Airborne Motion Imagery for Terrestrial Environments equipment.

“In support of this mission, Southern Research has updated the recording capability to be able to record lossless, high-definition full-motion video,” said Thomas Casey, advanced mechanical engineer for Southern Research. “By flying high-definition visible and infrared camera systems, we can eliminate much of the distortion seen by looking through the atmosphere, thus collecting some very unique data.”

Amir Caspi, principal investigator from the Southwest Research Institute in Boulder, Colorado, is eager to see what findings will be unearthed through this partnership with NASA.

“With the eclipse, we found the perfect opportunity to showcase the capabilities of the WB-57 while accomplishing the right kind of science, so that’s kind of what made this all come together,” Caspi said. “It’s a new adventure. I’m very excited that we can do not just groundbreaking solar science, but also breakthrough planetary science.”

This total eclipse for North America provides a rare chance for researchers to learn about the sun—in particular, its atmosphere. As the moon blocks the sun and snuffs out its light source, a faint corona can be seen against the dark sky. Also of interest is Mercury, which will get an infrared treatment to see how quickly its surface cools, what the soil is made of and how dense it is. The clues to Mercury’s formation, as well as other planets, may just be a solar eclipse away from understanding.

“[The mission] is just full of a lot of firsts,” Caspi said. “What I really hope is that our observation of the sun will give us new insight into the fundamental questions that we are interested in here, which are: What makes the corona so hot? Why is the corona so well organized, instead of being tangled? If we can make some headway into that, then that’s going to be amazing.”

With the WB-57 aircraft, scientists are hoping to catch evidence of nanoflares—or micro explosions on the sun. This phenomena is thought to convey energy to the sun’s outer atmosphere, where it is dissipated as heat. However, in the past, these miniature fireworks have been too small and frequent to detect individually. This excursion just might capture the nanoflares when the high-definition, high-speed images, captured at 30 times per second, are analyzed by Caspi and his team.

Preliminary results could come as early as days after the jets land at Ellington Field in Houston.

The clock is ticking. Soon, the moon will be in perfect alignment to briefly extinguish the light from the sun. Then, in the shadow of the moon on Aug. 21, answers will emerge.


For one team of NASA-funded scientists, the eclipse will last more than seven minutes as they follow the shadow of the moon in two retrofitted WB-57 planes. Amir Caspi of the Southwest Research Institute in Boulder, Colorado, and his team will use two of NASA's WB-57 research jets to chase the darkness across America on Aug. 21. Image Credit: NASA's Goddard Space Flight Center 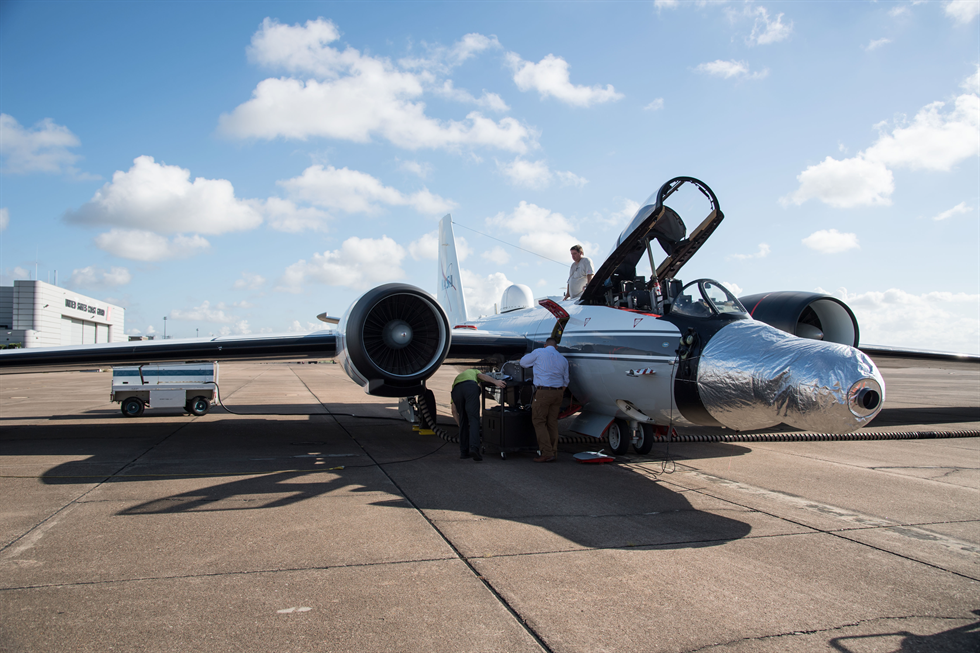 One of the WB-57 jets is readied for a test run at NASA’s Johnson Space Center in Houston. The instruments are mounted under the silver casing on the nose of the plane. Image Credit: NASA/Norah Moran 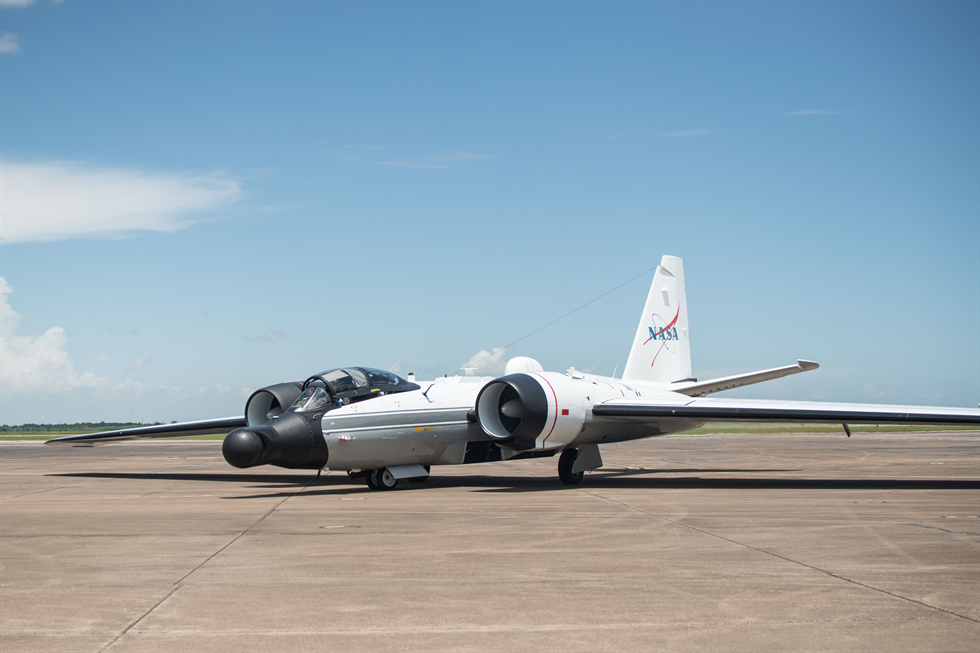 The WB-57 heads off to practice "chasing the eclipse," as it will do on Aug. 21. Image Credit: NASA/Norah Moran 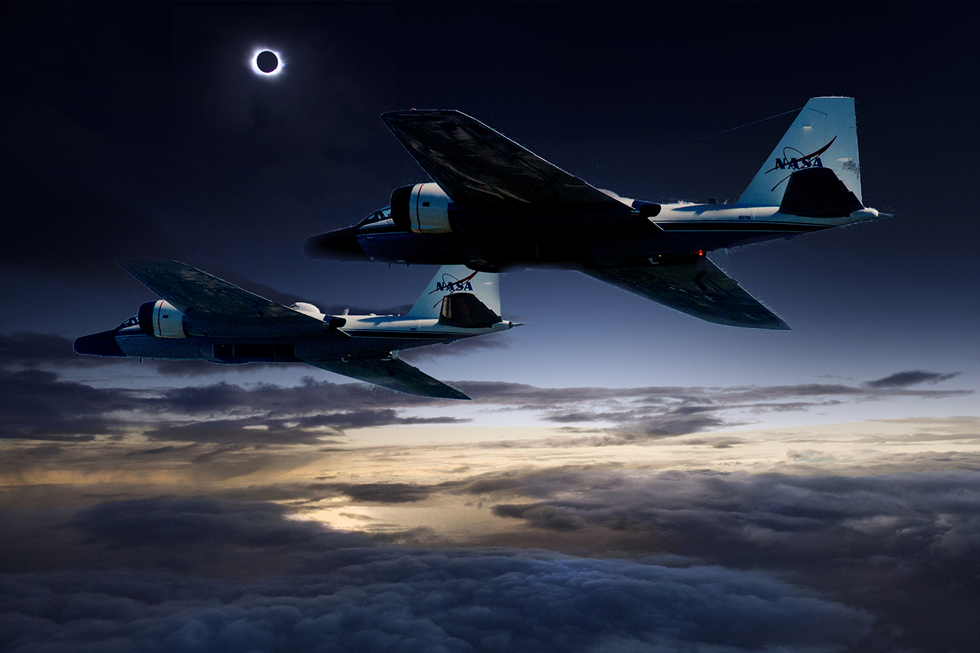