The biggest astronomical event of 2017: Eclipse Across America

The biggest astronomical event of 2017: Eclipse Across America

2017-08-14
On Aug. 21, 2017, all of North America will be treated to an eclipse of the sun. Anyone within the path of totality can see one of nature’s most awe inspiring sights—a total solar eclipse. This path, where the moon will completely cover the sun and the sun's tenuous atmosphere—the corona—can be seen, will stretch from Salem, Oregon to Charleston, South Carolina. Observers outside this path will still see a partial solar eclipse where the moon covers part of the sun's disk.

NASA and Johnson Space Center will have a bevy of events leading up to and on the big day. See more details below on how you can maximize your enjoyment of the biggest astronomical event of the year.

Aug. 15: “Ask the Experts” Eclipse Event
Attend the “Ask the Experts” briefing Aug. 15 from 10:30 to 11:30 a.m. in the Teague Auditorium. There, learn more about the upcoming solar eclipse and what you need to do to view it safely.

Be there Aug. 15 at 10:30 a.m.—and “in the know” about all things eclipse! The first 200 team members attending will receive a pair of solar-eclipse viewing glasses.

Aug. 21:
Eclipse Across America Employee Event: noon to 2 p.m.
JSC team members can come to Building 3, right outside the café, to observe the eclipse with Dr. William Stefanov, who's part of the Earth Science and Remote Sensing Unit within Johnson's Astromaterials Research and Exploration Science Division. Bring your glasses and your questions. There will also be a Sunspotter solar viewer available to observe.

NASA TV Broadcast “Eclipse Across America: Through the Eyes of NASA:” 11 a.m. to 3 p.m.
NASA TV will carry the total solar eclipse live from coast to coast from unique vantage points on the ground and from aircraft and spacecraft, including the International Space Station and JSC’s WB-57 high-altitude research planes.

Programming begins at 11 a.m. with a preview show hosted from Charleston, South Carolina. The main show begins at noon and covers the path of totality the eclipse will take across the United States, from Oregon to South Carolina. The program will feature unique views from NASA research aircraft, high-altitude balloons, satellites and specially modified telescopes. It also will include live reports from Charleston, as well as from Salem, Oregon; Idaho Falls, Idaho; Beatrice, Nebraska; Jefferson City, Missouri; Carbondale, Illinois; Hopkinsville, Kentucky; and Clarksville, Tennessee.

Catch NASA’s live coverage on social media, too:
Resources:
The NASA website has tons of good information about the eclipse. Share it with your friends and family across the country.
https://eclipse2017.nasa.gov/ 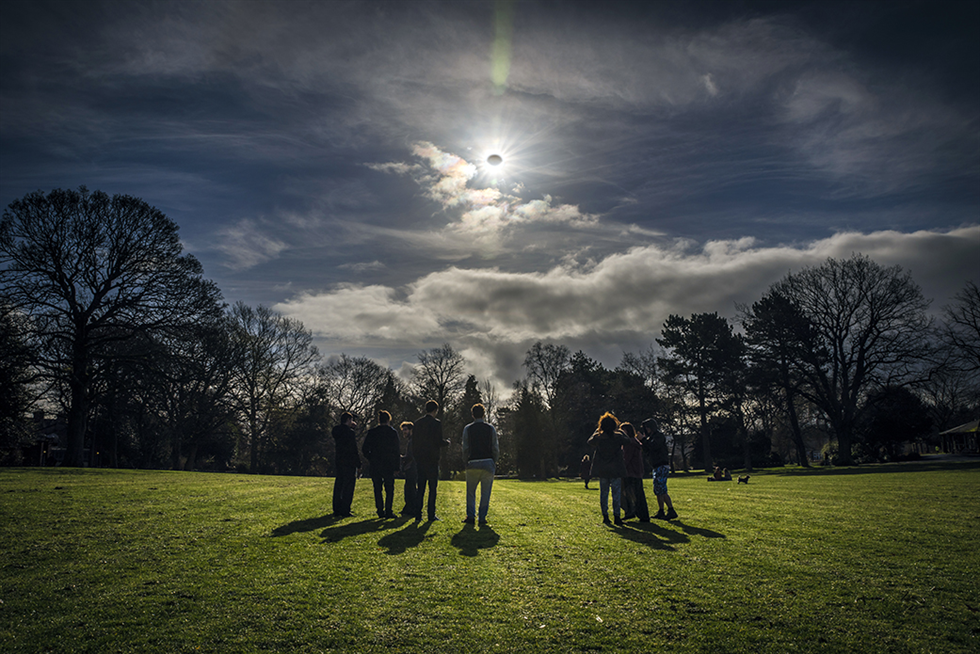 People watch a partial eclipse in Belfast, Northern Ireland, on March 20, 2015. JSC team members will have a variety of opportunities to take part in this year's solar eclipse. Image Credit: Robin Cordiner
Previous Article
Next Article