The production, known as “Robinson Astronaut: Kjell Lindgren,” was recognized for excellence in TV production with a 2015 regional Emmy award from the National Capital Chesapeake Bay Chapter of the National Academy of Television Arts and Sciences in the interview/discussion category. It was also honored for its exceptional cable programming with a 2015 bronze Telly award in the live event programming category.

The program covered a live downlink between Robinson Secondary School in Fairfax, Virginia, and Lindgren aboard the International Space Station (ISS) that occurred on Oct. 5, 2015. The entire school participated, and as many as 100,000 students from the school system tuned in live.

Throughout the 20-minute call, several students asked Lindgren questions on a range of issues, from how he exercises in space to what research he conducts while aboard the space station.

In addition to promoting science, technology, engineering and math curriculum, the program had another important function: to highlight Lindgren’s connection to Robinson. As a 1991 alum of the school, Lindgren is the perfect example of how education can be the gateway to success.

“Fairfax County Public Schools and Robinson, specifically, I think provided me with a terrific foundation to be able to go on to further education and to really pursue my goals and to achieve this dream of flying in space,” Lindgren said during the downlink.

Donny Haller, the producer of the program, understood the effects that interacting with a successful alum would have on the Robinson students.

“Kjell Lindgren is more than an ambassador for math and science,” Haller said. “Hundreds of participating Robinson students would learn Kjell walked the same halls and sat in the same classrooms as them. That is so powerful.”

This connection was widely celebrated by many.

“The school staff rallied around Kjell, a local hero, and a connection with the ISS quickly grew into a huge, well-deserved celebration,” Haller said. “The typical communication between students and astronauts is always an amazing experience, but we had an extremely rare opportunity to share terrific background stories with fellow Robinson students, which made this a truly great production.”

Being presented with the Telly and Emmy awards celebrated that excellence, and those who worked on the program were grateful for the acknowledgement.

“Honestly, I was fine with the idea that this is one of the best productions I’ve ever worked on,” Haller said, “but I’ll admit—it’s nice to have others recognize the importance of Kjell’s achievements, the work NASA does and this program.”

Haller hopes that the production will continue to inspire new generations of students for years to come.

“I think the impact of these students talking with a fellow Robinson Ram while he’s on the ISS is immense,” Haller said. “I hope the program can inspire someone watching to continue to ask questions, create, explore and, like Kjell, never give up.”

Aboard the International Space Station, NASA astronaut and Expedition 45 flight engineer Kjell Lindgren fields questions about life and work on orbit from students at the Robinson Secondary School in Fairfax, Virginia, during an in-flight educational event on Oct. 5. Lindgren graduated from Robinson in 1991. 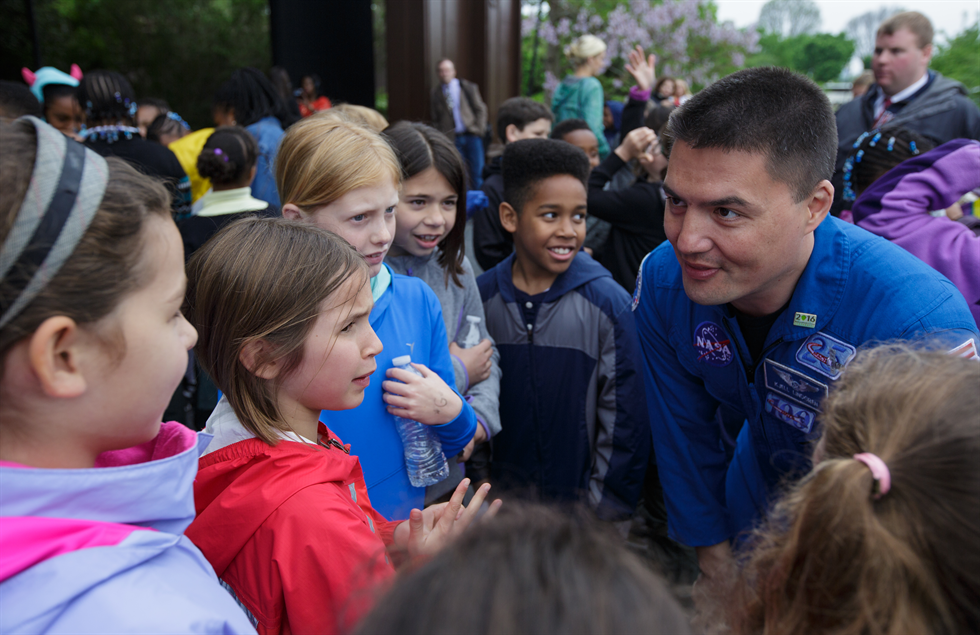