“I’m honored and humbled to be the grand marshal of the 44th annual Dr. Martin Luther King Jr. parade,” Wyche said during the opening ceremony. “Dr. King’s legacy lives on in all of us. Right now, we’re celebrating Johnson’s 60th anniversary in Houston and, with that, is the legacy of putting mankind on the Moon and the continued efforts of having humans living on the International Space Station continuously for more than 21 years. We’re not stopping there — we’re going to the Moon under Artemis, but this time we’re doing it differently. We’re going to land the first woman and first person of color on the lunar surface. As we celebrate Dr. King’s legacy and hidden figures of NASA’s past, we also look forward to our future united with a very diverse workforce — because space is for all!”

“For the past 10 years, the AAERG has been committed to public outreach and making sure our community has role models in STEM careers they can see and talk to,” said AAERG Chair Candice Palacios. “The MLK Parade has afforded us the opportunity to engage with the community on many levels, and we really enjoy the comradery of the event and will continue to support the Houston area and, hopefully, inspire future NASA employees.”

The Space Exploration Vehicle rover, too, made for a stunning appearance at the parade, which was attended by approximately 25,000 spectators. In addition to the parade festivities, Wyche took part in press interviews and interacted with the Next Generation of explorers — young kids in search of inspiration and, of course, NASA stickers. 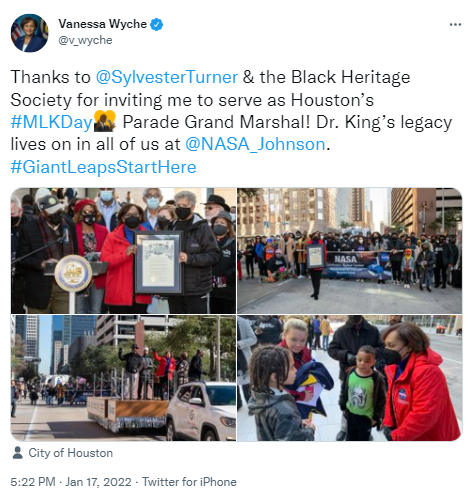 This year’s parade theme, “Be a Drum Major for Justice,” was in full evidence with marching bands, colorful floats, and more joining the NASA family in celebrating King and Houston as the fourth most diverse city in the United States.

See more photos from the event, below (click to enlarge).