This spring, a group of talented interns took the Orion Communications Office by storm, working on projects that would have been deemed impressive coming from the desks of even more seasoned, permanent employees.

NASA internships, like other careers within the space agency, show that being an astronaut is far from the only cool gig around. Even starting off in jobs only tangentially connected to aerospace, this recent group of interns provided a diverse skillset to further Orion communications goals. Science, technology, engineering, and math, or STEM, are subjects that ordinarily get most of the attention when it comes to future employment prospects — but they are by no means the only way to impact NASA’s missions and inspire the Artemis Generation. From a children’s picture book to 3D Orion models to animations and more, the latest projects produced by students show that creativity may just be the one unifying ingredient to success in 2021.

NASA and programs like Artemis, which aims to land the first woman and first person of color on the Moon, rely on support from the general public. This is where the agency’s communications and public affairs offices come in. To inspire becomes the mission.

And while interns offer a fresh perspective on how NASA reaches these audiences, these emerging professionals also benefit in learning and growth with ready access to the space program’s esteemed experts.

One way Orion looked to capture the youngest of attention spans was through a picture book, which Shane Tolentino worked on during her internship. Tolentino graduated in December from Columbia College Chicago with a Bachelor of Fine Arts in illustration and a minor in environmental science.

“My main project was working on illustrations for ‘You Are Going: A Story About Artemis,’ which is a picture book for young readers,” Tolentino said. “It breaks down the major components of the Artemis program for kids, accompanied by my illustrations about space exploration told from a human-focused perspective.”

For Tolentino, knowing that the picture book could reach so many young readers in the world is heartwarming and humbling. “I’m honored that I get to help tell this story through my art, because I still remember the impact of books I read when I was younger. I'm a big reader (of books for kids and grownups alike!) and a huge believer in books being able to change the world, especially when you put diverse groups of kids at the forefront of these images. When you can see yourself represented in these roles, especially at such an incredible place like NASA, it makes anything feel possible.”

Intern Erika Peters, meanwhile, relied on her bachelor’s degree in journalism from Stony Brook University to craft a reference guide for the Orion program. Targeted for aerospace subject-matter experts conducting outreach for the agency, the more-than-100-page reference guide acts as an Orion-centric encyclopedia.

“During my internship, I researched, wrote, and edited information for the guide, which will be in the form of an online, downloadable PDF file,” Peters said. “The guide is organized into sections that include detailed information on spacecraft elements, partner programs, completed ground and flight tests, upcoming mission information, and more. It provides a home for specifics, as well as big-picture ideas that employees will be able to easily reference when needed. Much of the information in this guide can be currently found scattered across different NASA locations on the web, and some cannot. Now that it is all contained within a single document, it will make sharing Orion information and accomplishments across different areas of the program easier and more convenient for NASA. I am just so grateful that the Orion program has given me the opportunity to use my writing, editing, and communication skills to create a resource that I think is going to be extremely useful for many, and that I am proud of.”

Seth Lambert, who is about to graduate from the Rochester Institute of Technology, is majoring in game design and development. His recent internship experience capitalized on the fast-paced world of gaming, which will bring the Orion spacecraft to life on its first journey around the Moon. The suite of applications Lambert developed — the Artemis Real-time Orbit Website, or AROW — uses augmented reality to allow spectators to track Orion with their phone and the corresponding app.

“My work as an intern for the Orion team was to develop software that will provide real-time visualizations of the upcoming Artemis missions using game technologies and telemetry data coming down during flight,” Lambert said. “I am very excited for this project to be seen by a wider audience, both within and beyond NASA, as I think it is a really powerful way to engage with the missions and understand the scope of what NASA is trying to accomplish with the Artemis program.”

Be sure to follow Orion on social media, because when Artemis takes off, NASA fans will be able to use AROW to see the flight path, where Orion will go next, browse images downloaded during the flight and, by simply raising and pointing one’s phone at the Moon, see Orion’s position and flight data as an overlay. 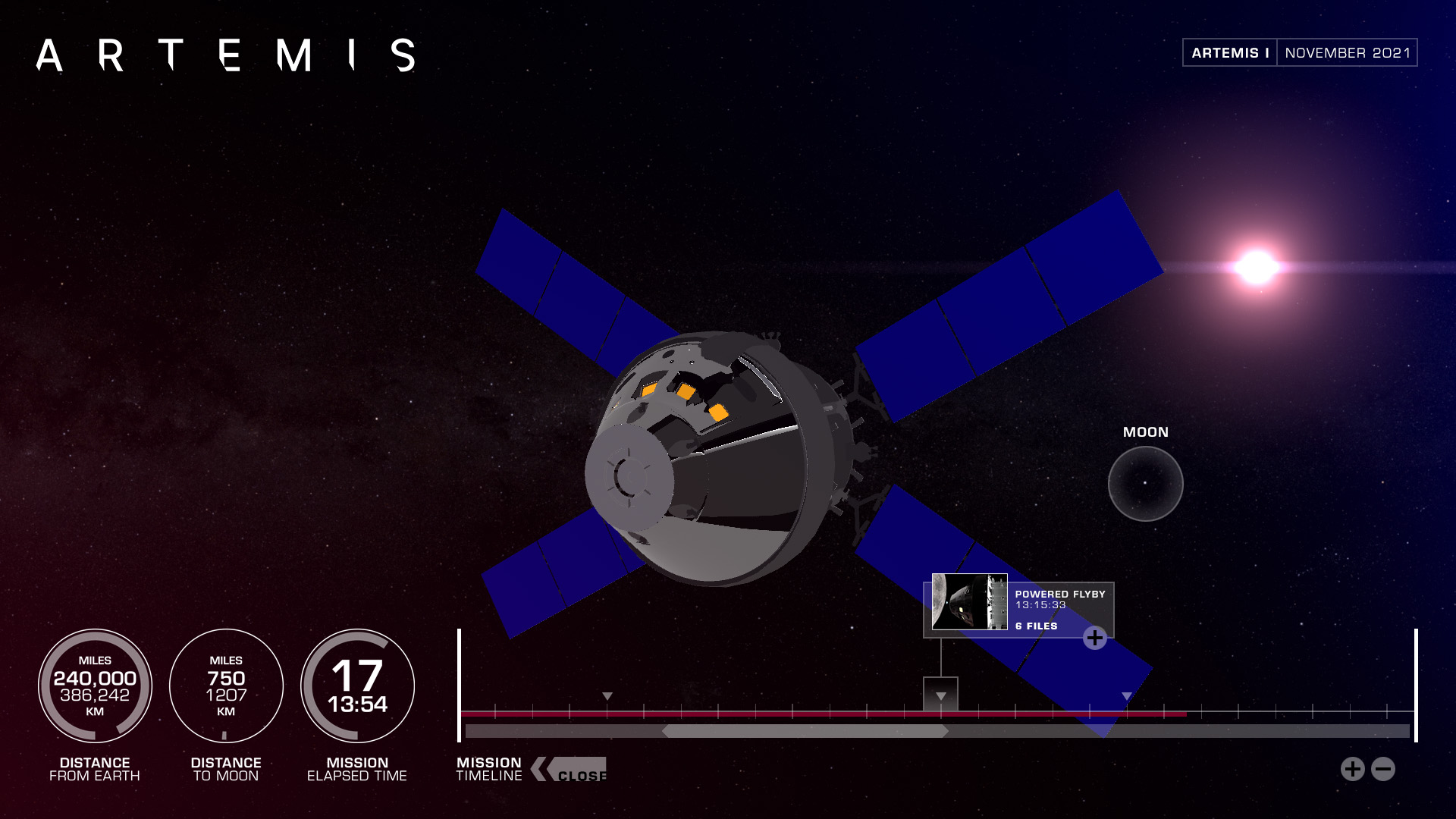 A mock-up of the Artemis in Real-time Orbit Website, or AROW, in action following Orion during the Artemis mission.

“My main project has been to first update the existing 3D model of Orion with improved textures and detailing,” Yanulis said. “Then, I used this model to create stills and animations of Orion at various stages of flight. These animations and stills will be used in a variety of mediums to educate the public about Orion and get people excited about the Artemis program. Eventually, we hope to replace all the existing Orion visualizations with my new and improved version, including on the NASA website and on roll-up banners for events.”

Success, once realized, can become addictive, as Yanulis can attest.

“Amazingly, one of my animations was posted with credit to the main @nasa account on Instagram, and is now at 721,000 likes!” Yanulis said. “I'm extremely grateful and honored to have the opportunity to share my work with such a large audience, and I only hope it can inspire in more people the same love of space and space exploration as I have. As an artist, I've never had something I've made blow up like this before, and so it's amazing seeing all the positive support from so many people.” 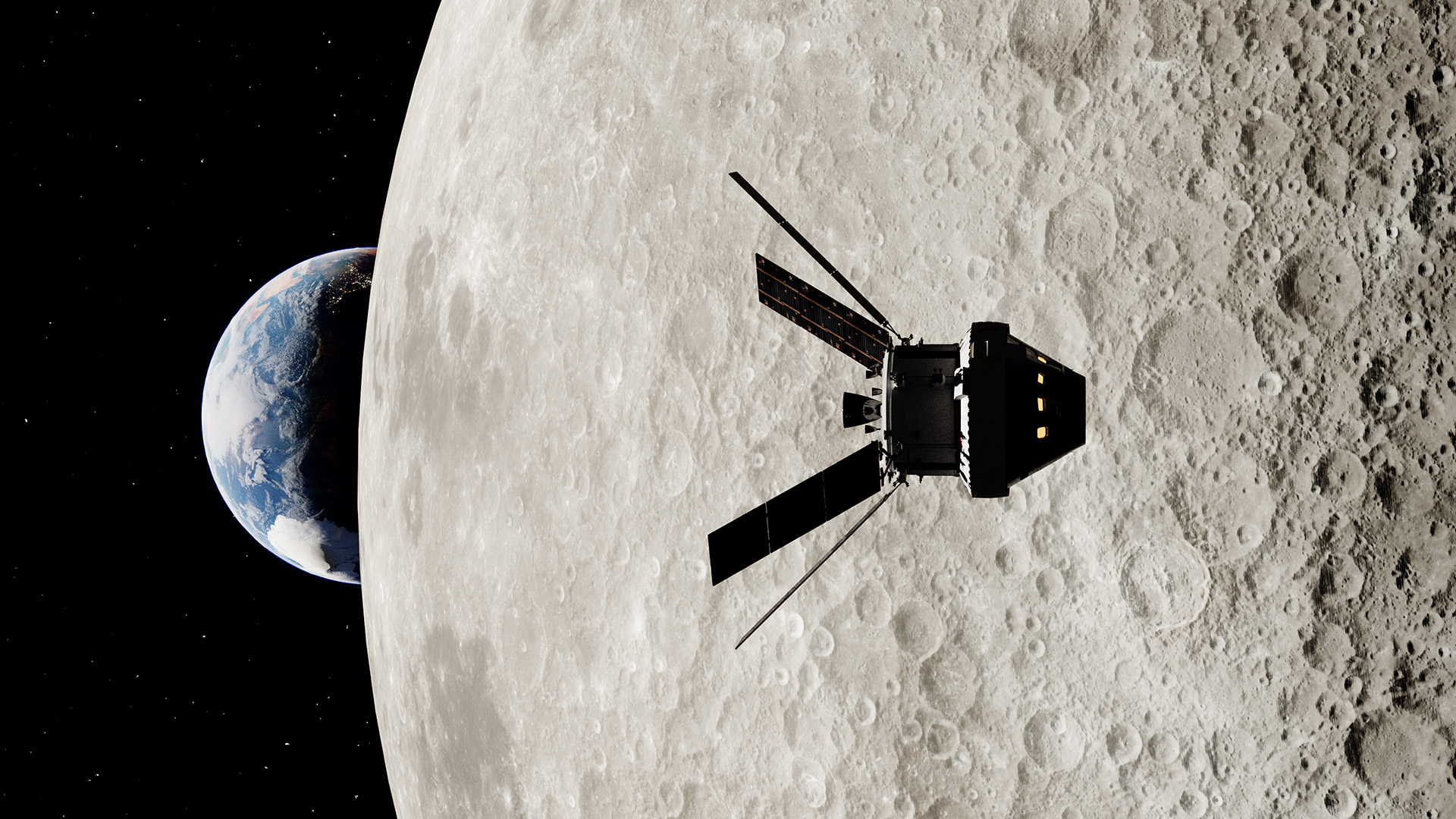 Liam Yanulis' 3D models and animations of the Orion spacecraft are helping to tell the story of Artemis and NASA's future exploration plans.

Impact: Not only for meteorites

We know what you’re thinking. Yeah, they’re amazing, though. What chance do I have to score an internship, or even a job one day, with NASA?

The chances are pretty good, it turns out, and it all starts at intern.nasa.gov.

Still, applying is one aspect. These superstar interns have their own advice for how you can realize your dreams.

“One piece of advice I would give to someone interested in working at NASA is to try to always stay engaged with your curiosity,” Yanulis said. “For me, curiosity has inspired a passion for learning, which has allowed me to persevere through difficult classes and challenging times, knowing that there is always something new to explore. People who are curious and want to push the boundaries of what is possible are just who NASA is looking for. I will also say — for those that may be considering applying but are intimidated by the competitive application — apply! I considered not applying because the prospects seemed so unlikely, but lots of NASA positions every semester don't get filled because not enough candidates apply, so your chances are better than you think. I can assure you that amazing things can happen if you make yourself available to them, and a job at NASA may be one of those.”

And, once at the space agency, there’s one thing in particular that should be a part of a newbie’s to-do list.

“Take advantage of the community of great minds at NASA and learn as much as possible,” Lambert added. “There are countless disciplines put to work every day at NASA by the talented and brilliant minds here, and there is a wealth of experience to be had by asking questions and jumping on every opportunity to learn.”

For Peters, her NASA internship helped reinforce her answer to the oft-asked question, “So, what do you want to be when you grow up?”

“I really enjoy learning about new topics and sharing the interesting things I’ve learned with others through my writing,” Peters said. “The field of science communication allows me to do that and share the amazing, but sometimes complex, work of others in an easily understandable way. This internship has really solidified pursuing a career in that field for me. It has been so rewarding to communicate with NASA management and engineers and work with them to make complex information about the incredible work on Orion and our progress going back to the Moon easily accessible.”

Tolentino agrees. “Before I had the opportunity of a lifetime to make art for NASA (it still feels unreal to say that) during my tours in fall 2020 and spring 2021, I was actually looking for opportunities to design children’s books for publishing companies. When I said yes to start working at Johnson Space Center, I never would have thought that my project would lend itself so beautifully to my passion for children’s books, and that I would be able to make one myself. My internship in the Orion program has definitely cemented my love for storytelling to younger audiences and creating colorful illustrations along with a love for space exploration.”

Good news! Even if you love space but your strengths lie outside STEM subjects, there’s still a place for you at NASA. After all … you can’t spell Artemis without “art.” 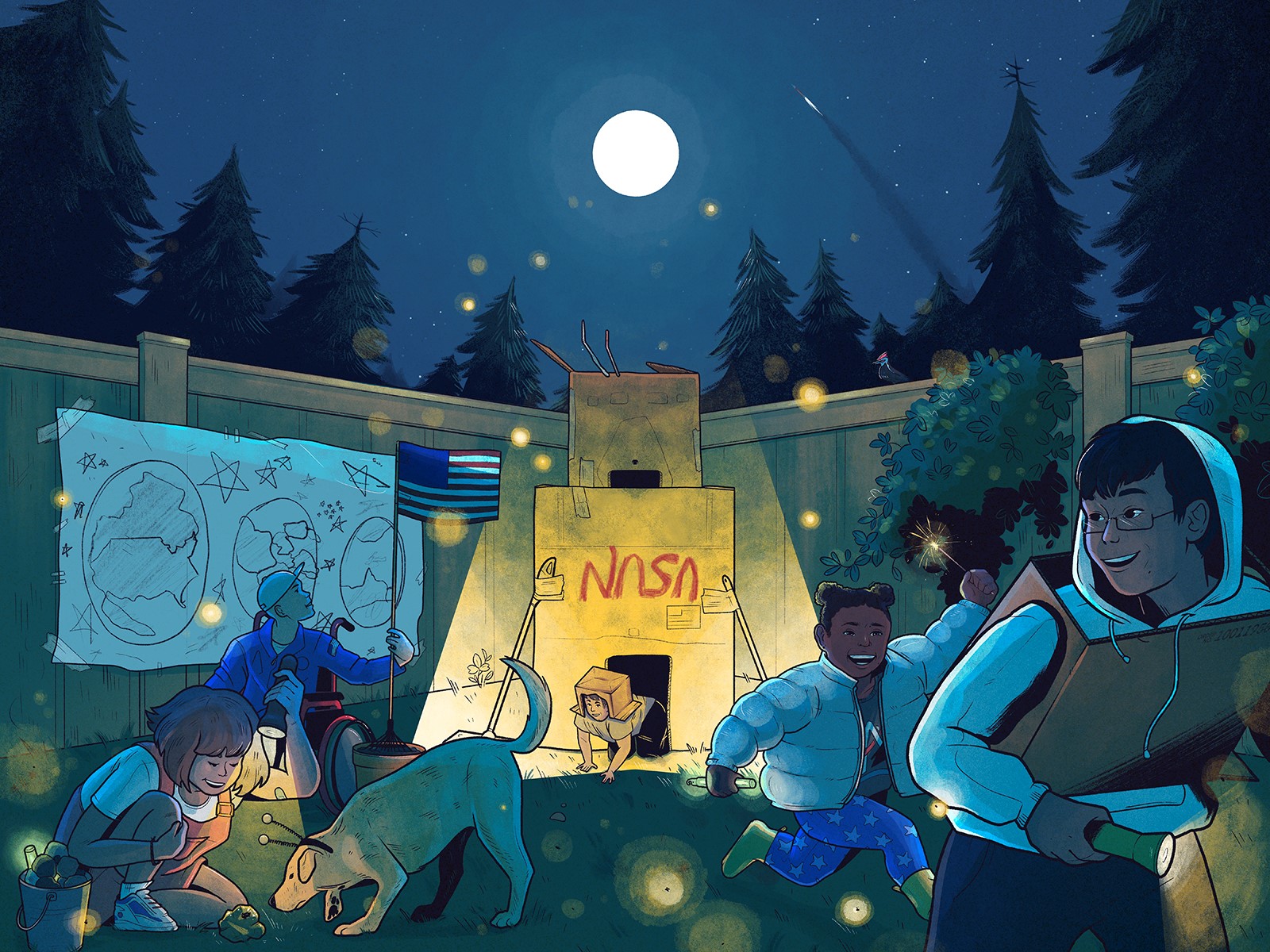 Artwork from "You Are Going: A Story About Artemis." 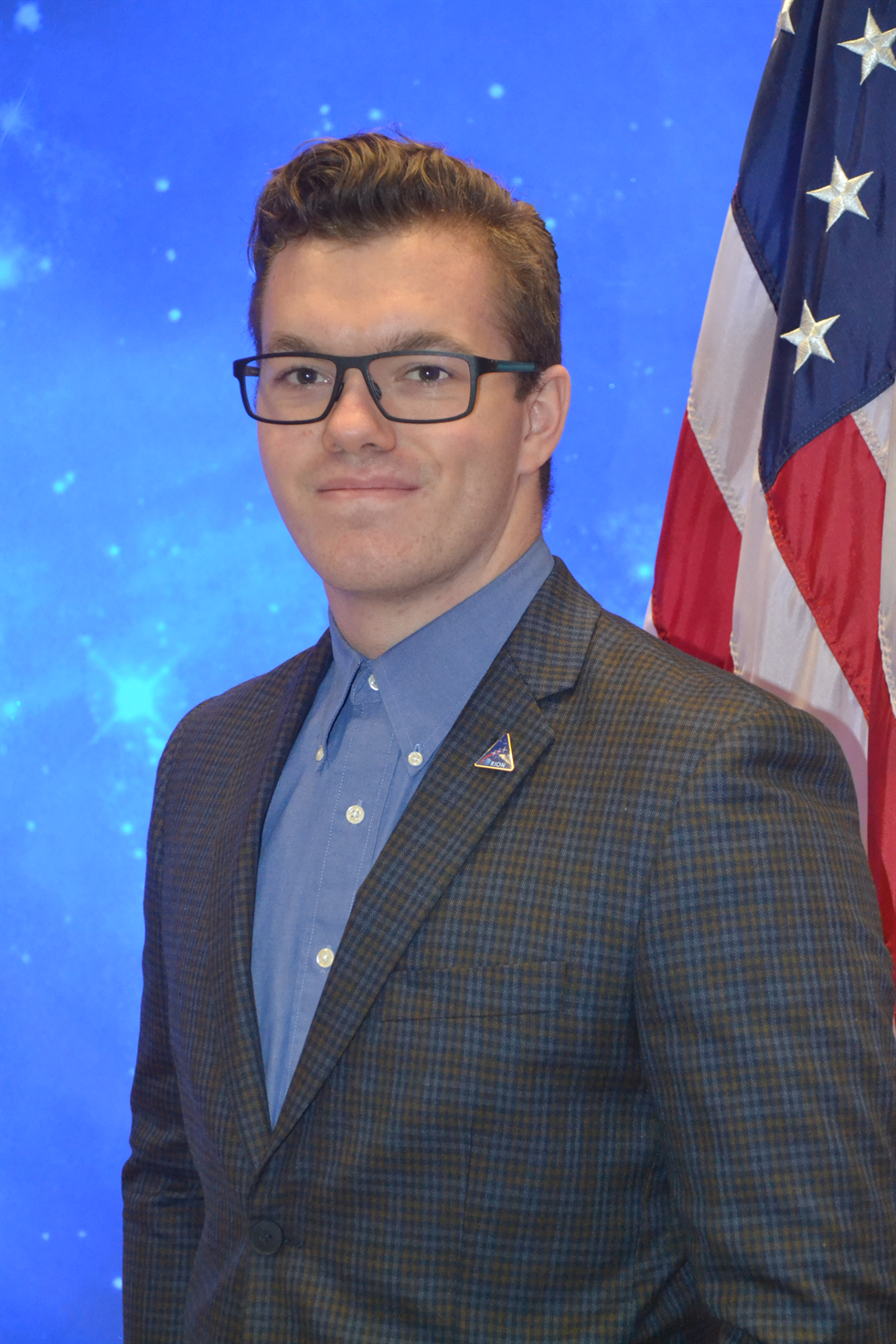 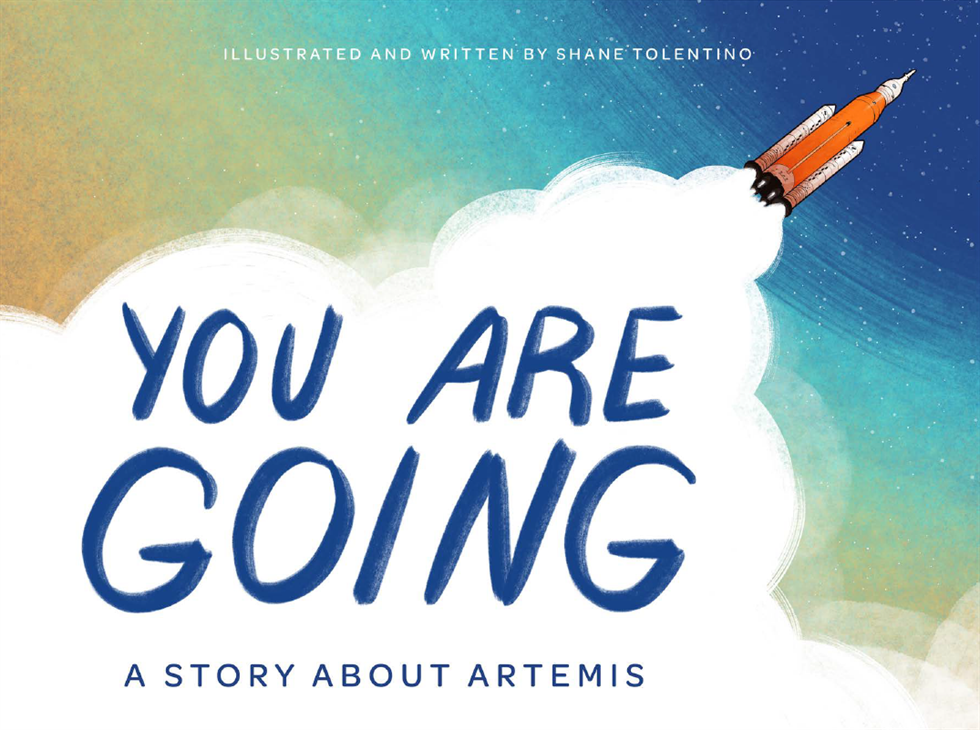 Cover design for "You Are Going: A Story About Artemis," the storybook written and illustrated by intern Shane Tolentino.
Previous Article
Next Article