As NASA plans long-duration missions to the Moon and Mars, a key factor is figuring out how to feed crews during their weeks, months, and even years in space.

Food for crews aboard the International Space Station is primarily prepackaged, requires regular resupply deliveries aboard cargo spacecraft, and degrades in quality and nutrition after about 18 months. But what if astronauts could grow some of their own food in microgravity? Researchers on Earth and crews aboard the International Space Station are exploring the idea by testing various crops and equipment to see if the plan could work.

NASA hopes to successfully grow fresh, pick-and-eat crops that are easy to produce and do not require a lot of extra equipment or precious electrical power.

“Crews really seem to enjoy growing the food themselves,” said Howard Levine, chief scientist for NASA’s International Space Station Research Office at Kennedy Space Center in Florida. “It’s a nice reprieve from typical activities on the station, and astronauts often volunteer their free time to do it.”

To date, NASA has grown a variety of plants, including lettuces, mustard varieties, and radishes — and learned a lot about how to successfully do so in the process.

Here are seven aspects of plant growth we are studying aboard the space station:

1. Picking the right plants
What grows well on Earth may or may not do so well in space. Before sending a crop to space, scientists must identify which plants to test aboard the space station. To improve that process, NASA started a project in 2015 with the Fairchild Botanical Garden in Miami called “Growing Beyond Earth.” The program has recruited more than 230 middle and high school science classes across the United States to grow different seeds using special equipment. Seeds that grow well in the classrooms are then tested in a chamber at Kennedy that closely resembles the space station’s equipment. Selected seeds that do well at Kennedy are then sent to station. How they grow in orbit can inform the selection of plants for long-duration missions requiring only minimal crew attention.

2. Learning to garden in space
Plants need a place to grow, and NASA has tested out a number of facilities to host a microgravity garden. One way is by experimenting with the Vegetable Production System, or “Veggie,” which is a simple, low-power gardening chamber that can hold six crop plants. Seeds are grown in small fabric “pillows” placed in Veggie. Crews then look after and water the plants by hand, similar to caring for a window herb garden on Earth.

NASA is developing another system, called the Passive Orbital Nutrient Delivery System, or PONDS, to work with the Veggie platform. PONDS replaces the seed pillows with a new plant holder that automatically feeds and waters the produce, but still requires the crew to do some cultivation tasks. Research also uses a hands-off system called the Advanced Plant Habitat. This fully-automated device is designed to study the physiology of how plants grow in space in ways that require only minimal crew attention. 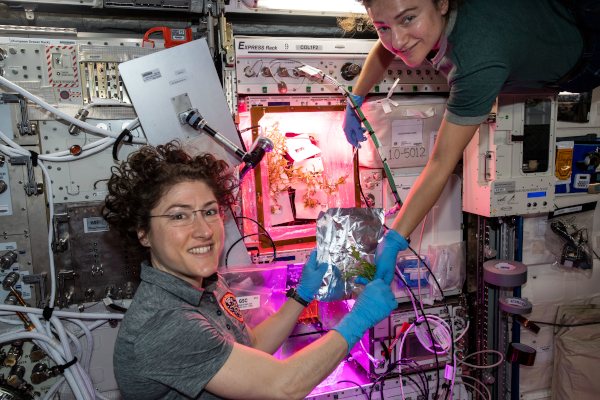 3. The right light
The composition of light that shines on plants can affect their size, nutritional content, microbial growth, and taste. Plants particularly rely on red and blue light to grow. Researchers ran experiments aboard the space station to see how different ratios of red and blue light influenced plant development in space. The experiments showed that plants in space grow well under the same light conditions preferred by plants on Earth. While green lights are not necessary for plant growth, they are included in plant growth systems so the plants also appear similar to those grown on Earth.

4. The influence of gravity
Changes in gravity can affect how plants grow and how many crops they yield. Plants can sense gravity using a mechanism that involves changes to calcium within their cells. Astronauts recently ran experiments aboard the space station to measure how microgravity affects these calcium levels, which could offer clues for designing improved ways of growing crops for food in space.

In the PESTO experiment, crews grew wheat plants to see how microgravity may change some of their key features. They found that microgravity alters leaf development, plant cells, and the chloroplasts used in photosynthesis, but did not harm the plants overall. In fact, wheat plants grew 10% taller compared to those on Earth.

Station crews also successfully grew two generations of mustard plants using the Advanced Astroculture chamber for an experiment that showed the change in gravity caused seeds to be smaller and secondary branches and seed pods to grow differently. Additionally, the experiment grew soybeans from seed-to-seed in space, which produced larger plants and seeds. 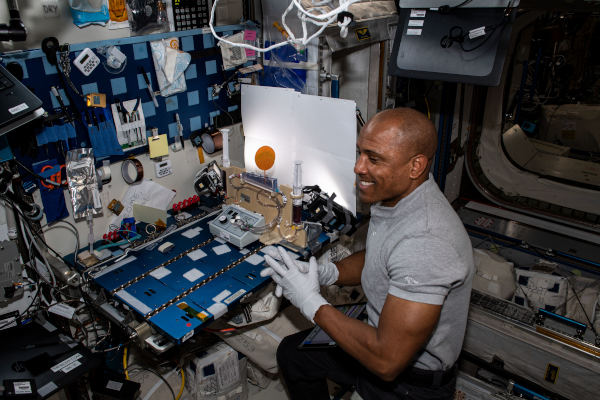 NASA astronaut Victor Glover works on the Plant Water Management experiment that is exploring hydroponics as a way to sustain plants in microgravity from germination through harvest. Credits: NASA

5. Water delivery
One significant challenge to growing plants in microgravity is providing enough water to their roots to keep them healthy without drowning the plants in too much water. Numerous experiments have tested a variety of methods to achieve this, including the new PONDS facility mentioned above and the Plant Water Management experiment. The water management study demonstrated a hydroponic method for providing water and air to the root zone to help them grow. Researchers are growing plants both aboard the space station and on Earth to compare how well they develop.

6. How old is too old?
Future space missions could go on for years, which means the seeds that astronauts bring along could be far from fresh by the time they need to plant them. On Earth, seeds have a decrease in viability and germination over time. But how does the age of seeds and long-term exposure to the spaceflight environment affect their ability to germinate and grow? To find out, in January 2021 NASA grew lettuce and seeds from the cabbage family (kale, mustard, and bok choi) that had been aboard the station for nearly three years. The results showed that while the lettuce seeds did not grow well compared to seeds that had been in space less time, the mustard seeds responded better than expected to the storage time in space.

7. The human effect
Gardens need tending, of course, which means astronauts or robots have to look after the plants that are growing. NASA studied how gardening in space could contribute to the behavior and well-being of astronauts. Many astronauts reported they found caring for the plants a fun and relaxing activity.

What’s more, astronauts say the time spent gardening makes them excited to eat the fresh produce once it’s ready. The excitement motivates astronauts to creatively use the produce as ingredients in their meals, increasing their quality of life in space and boosting their morale.

The Biological and Physical Sciences (BPS) Division of NASA’s Science Mission Directorate at NASA Headquarters in Washington provides funding for Veggie, the APH, and related investigations.

Explore more pictures of plants aboard the space station here. 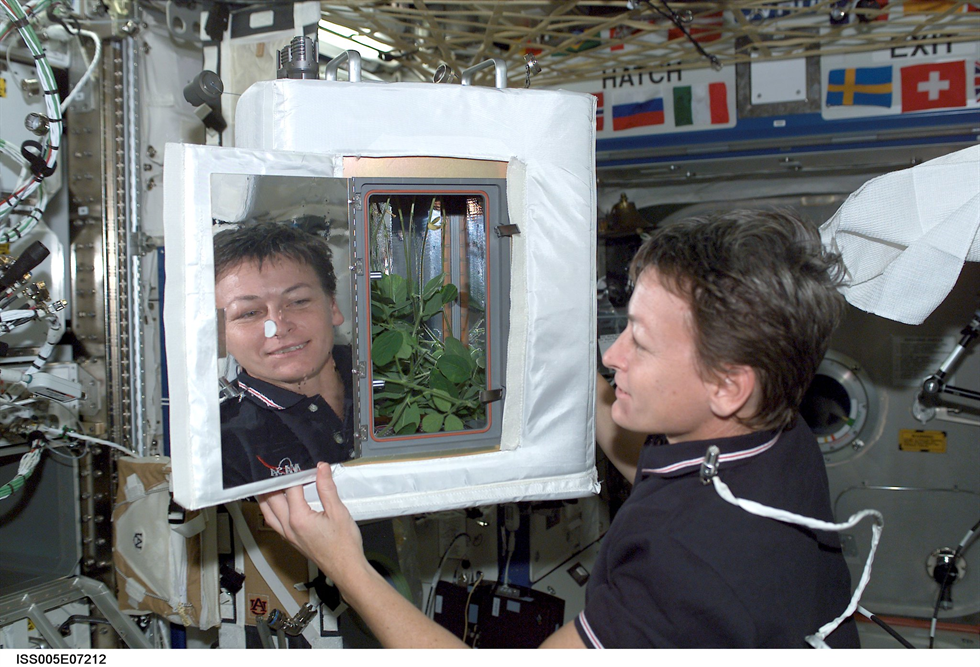 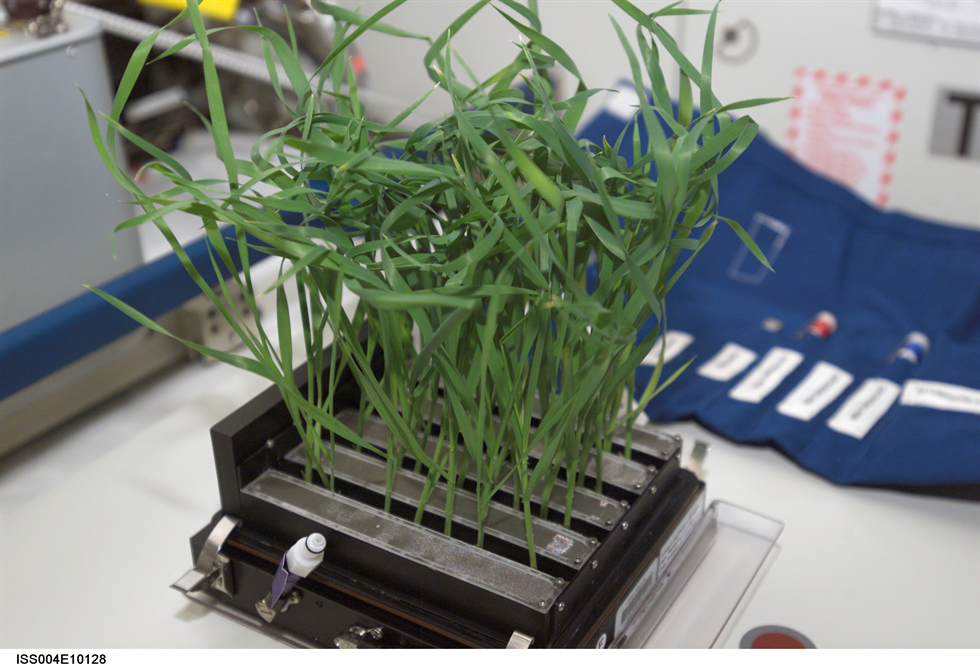 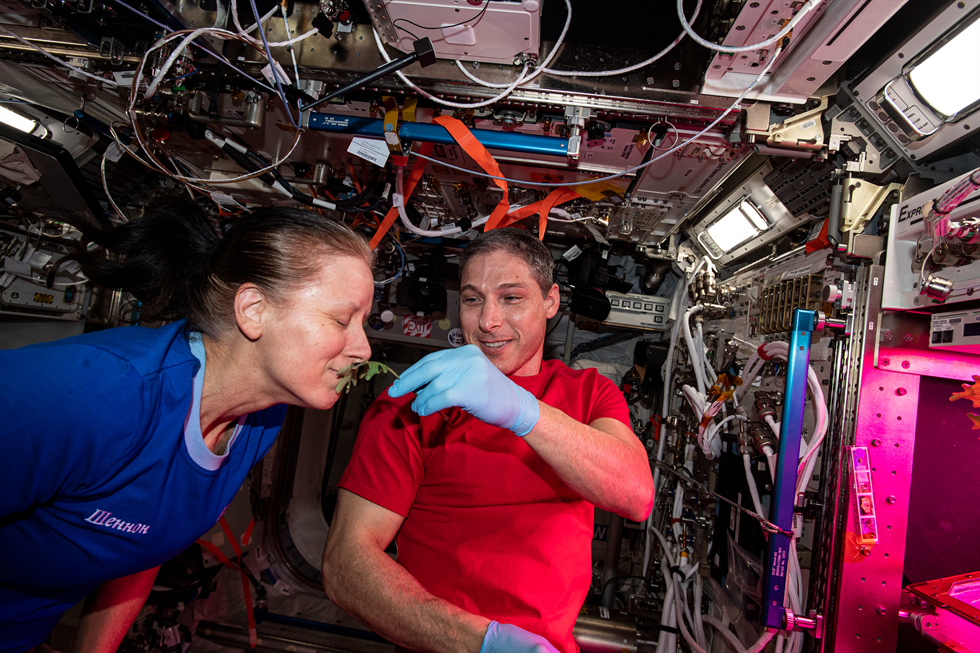