Preparations for Space Shuttle Columbia’s first mission made significant progress in November 1980, and managers remained optimistic that the initial flight could take place by March or April of 1981. Significant milestones accomplished included the stacking of the vehicle’s major components at NASA’s Kennedy Space Center in Florida in preparation for rollout to the launch pad before the end of the year. The prime crew for STS-1, John W. Young and Robert L. Crippen, as well as backups Joe H. Engle and Richard H. Truly, participated in integrated tests of the assembled vehicle while strapped into their seats in Columbia’s cockpit. NASA’s Johnson Space Center in Houston inaugurated a new facility for underwater facility to train space shuttle astronauts for spacewalks. 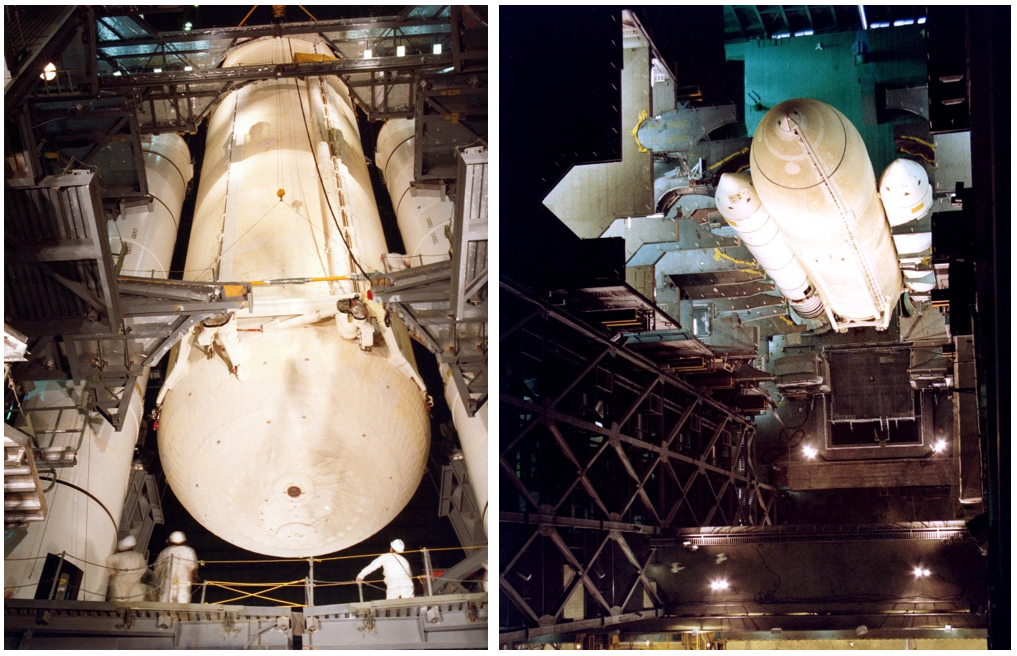 Left: Workers in the Vehicle Assembly Building at Kennedy lower the external tank before mating it with the two Solid Rocket Boosters (SRBs) on the Mobile Launch Platform (MLP). Right: The mated external tank/SRB stack on the MLP awaits the addition of the orbiter Columbia. Credits: NASA

Inside Kennedy’s cavernous Vehicle Assembly Building (VAB), workers continued to assemble the large components of the space shuttle stack to prepare for Columbia’s first flight. They had stacked the twin Solid Rocket Boosters (SRBs) on the Mobile Launch Platform in January 1980. Beginning Nov. 2, they lowered the external tank between the two SRBs and bolted them together, an operation that took about two days. In the nearby Orbiter Processing Facility (OPF), engineers reinstalled the three space shuttle main engines onto Columbia and bonded the final 300 heat-resistant Thermal Protection System tiles to the orbiter’s exterior. Prime crew members Young and Crippen thanked workers in the OPF after the tile work was completed.

“We’ve come to pay tribute and give a word of thanks and a hardy well done to the people who worked on this spaceship. It’s a beautiful vehicle,” Young said.

Left: Workers tow space shuttle Columbia from the OPF to the VAB at Kennedy in Florida. Middle: Columbia about to enter the VAB. Right: Columbia in the VAB transfer aisle. Credits: NASA

After a stay of 20 months in the OPF, on the evening of Nov. 24, workers backed Columbia out of the OPF and rolled it over to the VAB, the transfer taking 30 minutes. A large crowd of Kennedy employees cheered the move. The next morning, workers grappled Columbia with a crane and lifted it from the transfer aisle, hoisting it more than 190 feet in the air to transfer it to High Bay 3 before lowering again to join it to the already assembled external tank and SRBs.

By early Nov. 26, workers completed all the connections to Columbia as engineers activated the orbiter to prepare the assembled vehicle for a series of tests. As part of the two-week shuttle interface test, on Dec. 4 engineers powered up the entire stack for the first time. Additional tests ensured that all systems operated as expected in the overall vehicle and ground systems. The prime and backup crews participated in ascent and entry simulations, strapped in their seats in the orbiter. Successful completion of the tests led to the next major milestone, the rollout of Columbia to Launch Pad 39A in late December.