Creating a Culture of Unity and Belonging at JSC

Creating a Culture of Unity and Belonging at JSC

In January 2020, health services company Cigna released a report titled, “Loneliness is at Epidemic Levels in America.” The study found that 3 out of 5 Americans are lonely, meaning they feel left out, poorly understood, and wish for more meaningful connections.

The world has turned upside down in the time since the study was released — and it would be hard to argue that the sense of isolation has improved. What is the balm we need in 2020 and beyond? What can overthrow this epidemic of loneliness?

According to researchers and psychologists, the best way to combat loneliness is to have meaningful interactions and meaningful conversations — to share our lives with others. In essence, to belong.

Feeling like you don’t “fit in” is something we have all experienced. Most of us have vivid childhood memories of times when we didn’t fit in. That feeling — often deeply painful — doesn’t vanish for adults. In fact, it can show up at work.

On July 23, 2020, NASA Administrator Jim Bridenstine announced NASA’s newest core value: Inclusion. Bridenstine said, “NASA is committed to a culture of diversity, inclusion, and equity, where all employees feel welcome, respected, and engaged.” The NASA Safety Culture Handbook states, “You can think of the core values as part of our NASA DNA; they’re the master molecules embedded in all of our endeavors, present at each project milestone and critical for mission success.”

We all deserve to feel included, which also means we have a duty to create an environment that is welcoming, respectful, and engaging. In fact, creating a culture of inclusion can directly lead to more engagement, better productivity, and higher retention.

“Many of us in the NASA family saw ‘Hidden Figures,’ and we thought about Katherine Johnson and Mary Jackson. The question is: What would we have gained if they didn’t have to work so hard to get to use their talents? We got extraordinary accomplishments and contributions, even in the face of them having to jump over all kinds of hurdles. What have we missed as a society, as a country, as a world, because we’ve left people out?”

As NASA, our people are the most important asset. When employees feel like they belong at Johnson Space Center, they are empowered to accomplish NASA’s mission. What could we have accomplished as a center if our colleagues were included? What innovations have we missed out on by putting up artificial obstacles? This is where NASA’s Unity Campaign comes into play. Where Inclusion is our new value, the Unity Campaign is our call to action. We have been challenged to rise above artificial constructs that divide organizations and people. And in a time when we may be physically separated, we are being charged to build deeper connections with our NASA colleagues. Over the next few months, you will see and hear more about Unity at NASA and how you can play a strategic role.

In the meantime, ask yourself the following:- Am I doing everything in my power to include my colleagues?- Is there any action or behavior that could result in others being excluded, even if it’s unintentional?- In team meetings, does each person have the opportunity to contribute fully to the conversation?You can also tap into the resources from our office, including articles, videos, podcasts and more on the Inclusion and Innovation website. Additionally, you can attend an event hosted by a JSC Employee Resource Group, specifically with the intent of better understanding your fellow NASA teammates.Bridenstine affirmed that the incorporation of a new core value is “an important step to ensuring this principle remains a long-term focus for our agency and becomes ingrained in the NASA family DNA. Together, we can continue to accomplish great things for all of humanity.” 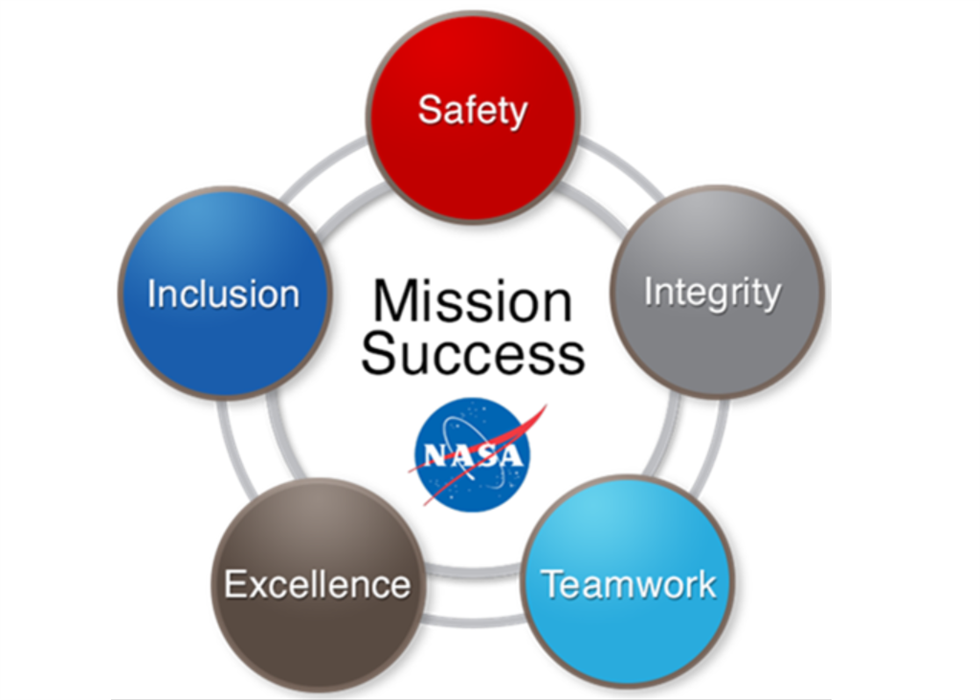