Preparations for the upcoming joint American-Soviet Apollo-Soyuz Test Project (ASTP) continued in April 1975, with just three months remaining until the historic handshake in space. During the previous two months, managers from both countries held joint working group meetings, and the crews from both countries completed joint training sessions at NASA’s Johnson Space Center in Houston. Meanwhile, American and Soviet mission controllers held joint simulations with both control centers tied in. In April, American astronauts traveled to the Soviet Union for the next round of joint training exercises and visited the Soviet launch facility in Baikonur in the Soviet republic of Kazakhstan. One area of concern arose when the next crew to visit the Soviet Salyut-4 space station experienced a launch abort, but Soviet officials assured their American counterparts that the incident would have no impact on ASTP.

The explorers spent the first week at the Yuri A. Gagarin Cosmonaut Training Center in Star City outside of Moscow, training with the Soviet first prime crew of Aleksei A. Leonov and Valeri N. Kubasov, the second prime crew of Anatoli V. Filipchenko and Nikolai N. Rukavishnikov, and their backups Vladimir A. Dzhanibekov, Boris D. Andreyev, Yuri V. Romanenko and Aleksandr S. Ivanchenkov. The crews spent their time in the Soyuz simulators, rehearsing all phases of the upcoming mission. The prime crews’ next face-to-face meeting would be on July 17 — in Earth orbit.

On April 19, the American astronauts visited the Soviet Mission Control Center in Kaliningrad, now Korolev, on the outskirts of Moscow. Called Tsentr Upravleniya Polyotami (TsUP) or, literally, the Center for the Control of Flights, the Soviets first used the new facility in 1973. Prior to that, the main control center was located at Yevpatoria in the Crimea. Managers in the TsUP, including ASTP flight director and former cosmonaut Aleksey S. Yeliseyev, briefed the astronauts on various console positions.

As part of a cultural visit to the Soviet Central Asian republic of Uzbekistan, the American astronauts left Moscow on April 25 for Tashkent. The next day, they visited nearby Bukhara and Samarkand before returning to Tashkent to tour the Uzbek capital. From Tashkent, they took a short flight to Leninsk, the town of 50,000 that supported the Baikonur Cosmodrome. Stafford had insisted on a visit to the Soviet launch complex, and was especially adamant about inspecting the Soyuz flight vehicle. They landed in Leninsk after dark, spent the night in the hotel where cosmonauts stayed and toured the facilities the next day. They visited the Assembly Building (known by its Russian acronym MIK) where engineers readied two Soyuz spacecraft for flight. All the American astronauts had a chance to sit in and inspect the prime Soyuz vehicle. They visited the launch pad, from which the Leonov and Kubasov would launch, did some sightseeing and, consistent with Russian tradition, planted trees along Cosmonaut Lane. After attending receptions, including one in traditional Kazakh style, the astronauts flew back to Moscow that night. The successful training session completed the agreed-to schedule of one familiarization and two training sessions in each country. Several joint simulations were planned for the next two months to prepare the astronauts and the ground teams for the historic handshake in space mission.

On April 5, 1975, cosmonauts Vasili G. Lazarev and Oleg G. Makarov launched aboard their Soyuz spacecraft from the Baikonur Cosmodrome as the next crew to occupy the Salyut-4 space station. They planned to spend about two months aboard the orbiting outpost conducting scientific experiments, returning to Earth in early June (well before the ASTP mission) and setting a new Soviet space endurance record. The first few minutes of the launch proceeded normally, but 288 seconds after liftoff, and at an altitude of 90 miles (the time of separation of the core booster stage and ignition of the third stage), something went awry. Only half of the pyrotechnic devices meant to separate the two stages fired, and the third stage ignited with the booster still partially attached. This caused the entire rocket to undergo unplanned motions that exceeded the threshold for the automatic system to call an abort. At that altitude, the launch escape system had already been jettisoned, and the only abort scenario involved the separation of the Soyuz spacecraft from the third stage, the separation of the spacecraft into its three components, and for the Descent Module (DM), with the crew inside, to make a ballistic return to Earth. In this scenario, the crew briefly experienced a deceleration load of 21.3 Gs instead of the three to four Gs experienced during a normal re-entry. The DM made a parachute- and retro-rocket-assisted soft landing 978 miles from Baikonur in mountainous terrain near the town of Gorno-Altaisk, in western Siberia, after a flight of 21 minutes and 27 seconds. The capsule landed on a snowy slope and began rolling toward a precipice, saved only by the parachute lines snagging on some vegetation. The crew was rescued and returned to Moscow. Lazarev apparently suffered internal injuries and never flew in space again, while Makarov’s injuries appeared less severe, and he made two more trips into space. The Soviets formally notified the Americans within three days of the incident, providing details to reassure them that a recurrence during ASTP could not happen, as the booster used on April 5 was of an older variety, while the ASTP Soyuz would be using an updated version.

Left: Oleg Makarov (left) and Vasili Lazarev at the hatch of the Salyut-4 trainer at Star City. Right: Lazarev (left) and Makarov about to board their Soyuz spacecraft at the launch pad in Baikonur. 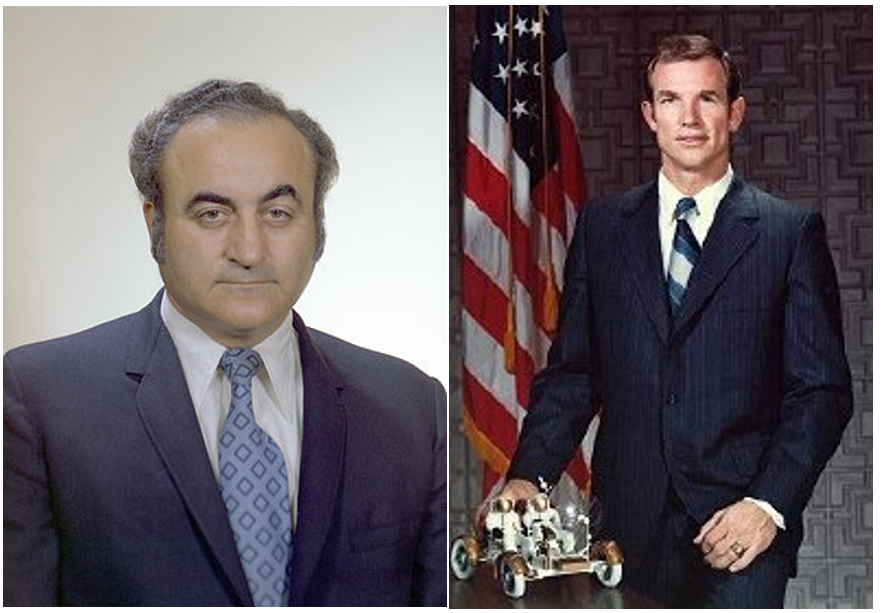 Two significant management changes at NASA took place in April 1975. Rocco A. Petrone, associate administrator at NASA Headquarters in Washington, D.C., resigned from the agency to take a position as president of the National Center for Resource Recovery in Washington. Petrone began his NASA career in 1960, assigned to the Saturn Project Office at what later became NASA’s Kennedy Space Center in Florida. He went on to become director of Launch Operations at Kennedy before moving to Headquarters after the Apollo 11 mission as the Apollo program director. He served for one year as the director of NASA’s Marshall Space Flight Center in Huntsville, Alabama, before returning to Washington.

NASA Administrator James C. Fletcher appointed former astronaut David R. Scott as the director of NASA’s Flight Research Center, now named after Neil A. Armstrong, in California. Selected as an astronaut in 1963, Scott flew on three space missions: Gemini 8, Apollo 9 and Apollo 15. Scott had served as the deputy director, and then acting director, at the Flight Research Center.

News events from around the world in April 1975: