Coming Soon! Time Travel Back to 1969

Coming Soon! Time Travel Back to 1969

OK, so maybe NASA Johnson Space Center team members won’t be able to exactly do that … But soon, you can achieve something pretty close to it when the Apollo Mission Control Center (MCC) reopens to what will be a whole lot of fanfare—and deservedly so—in time for the 50th anniversary of Apollo 11.

That giant leap, which was unforgettable to moonwalkers Neil Armstrong and Buzz Aldrin, was also unforgettable to all of humankind—especially the flight controllers living it. The Apollo MCC is where one of the biggest moments in the history of our nation and, quite possibly, the entire world, unfolded.

“For me, as the historic preservation officer and just as an American, this is one of the most important and historic places on Earth,” said Sandra Tetley. “We landed two men on another celestial object, the Moon, and brought them safely home again. For us to be able to do that in this room, that’s significant. So, it’s important for me and for my team for [the Apollo MCC] to be historically accurate. Not to look back and say, ‘This is more important than anything we’re doing now,’ but to look back and say, ‘This is significant. This is perhaps maybe as significant as Independence Hall, where we signed the Declaration of Independence.’”

Visitors to the newly restored Apollo MCC (which is ironically being updated to look dated) will be in for a time-traveling sensory experience unlike anything else on Earth.

“Everything will be just like it was in 1969,” Tetley said. “It will look like you have stepped back into time—like the flight controllers just stepped away from their consoles to get a cup of coffee, or take a smoke break.”

Except for the absence of smoke, which used to be prevalent from the cigarettes or cigars avidly smoked in the MCC, this room will be a perfect rendition of what it was during that pivotal mission.

“When you go into the viewing room, the seating is original fabric. The carpet is original. We’ll even have 1960s TVs working,” Tetley said. “There will be furnishings [on the consoles], ashtrays, documents, pens, papers, maps. And the appropriate buttons will be lit. The summary display screens will have the proper images. And the mission clock will be lit up to the appropriate time as well.”

To bring the Apollo MCC back this microcosm of history required collaboration with the National Parks Service, who did a historic furnishings report that analyzed the room and what needed to happen to bring the restoration about. 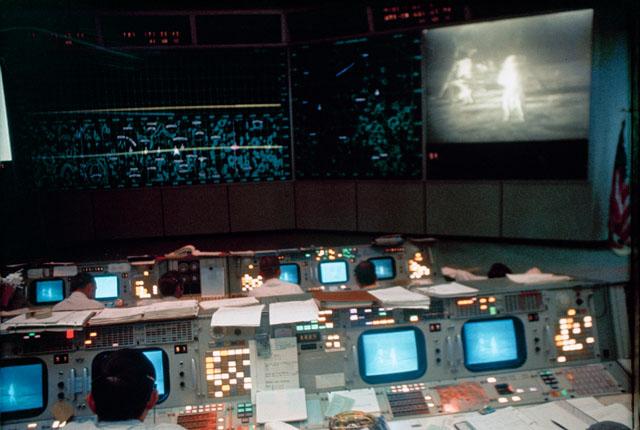 Mission control as it was during humankind's giant leap—man on the Moon. The MCC is being restored to mirror this moment in time. Image Credit: NASA

“We spent a long time trying to figure out how we were going to pay for it, but all along we kept moving forward on the research of the restoration and what needed to happen,” Tetley said. “Actually, that delay of not having the money allowed us to spend a lot more time on research, so then we were able to really get to things that we may not have ever been able to get to. The city of Webster gave $3.5 million, and that really gave us the bump we needed to get started.”

For all the details evident in the green- and taupe-hued room, the restoration team gathered the stories that drove them. For instance, there’s a special back door that held a lot of meaning for the flight controllers, who were in constant rivalry with the people running the simulators.

Escape hatches notwithstanding, there will be plenty more to see, down to the coffeemaker model that gave the flight controllers their own much-needed rocket fuel during Apollo 11. This was found on EBay—pristine and still in its original packaging.

If you have a hunger for the pistachio color palette that was all the rage in 1969, or want to see the epicenter of humankind’s first giant leap, the Apollo MCC reopens for Johnson team members to view it on the mornings of July 9 to 12. Look for details to come in Roundup Today.

Take a sneak peek below at some of the work that's recently been done to bring the room back. 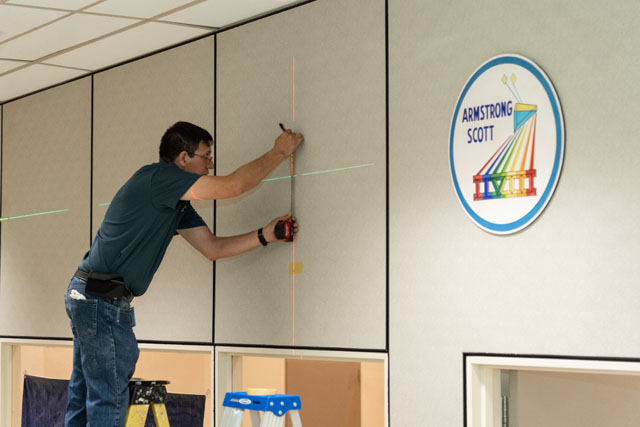 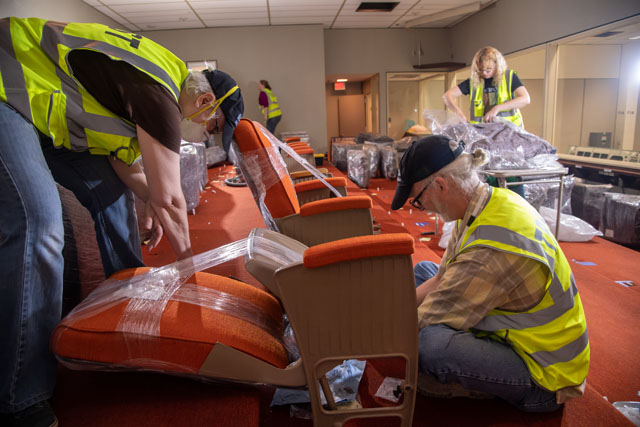 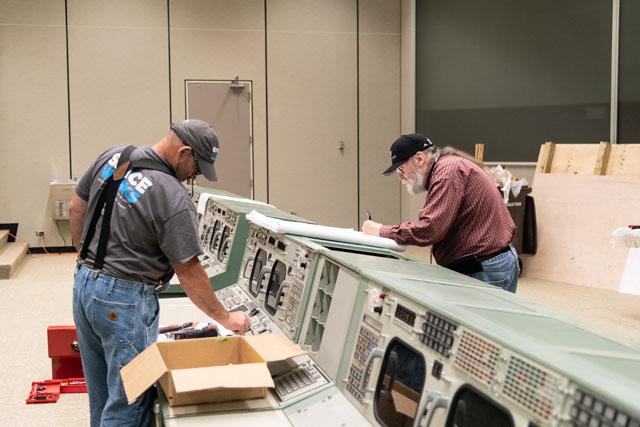 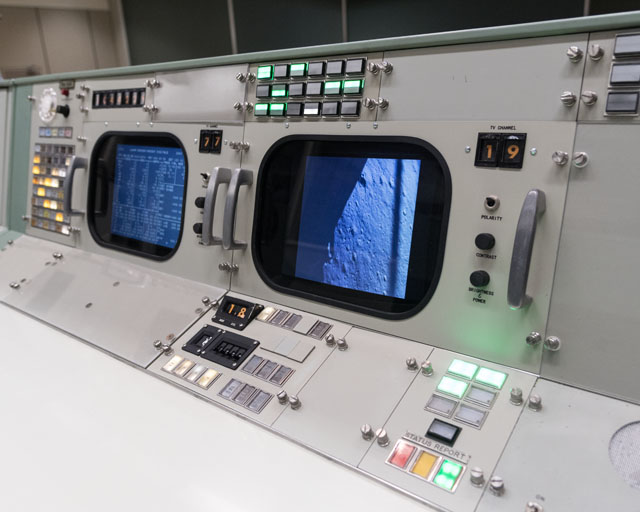 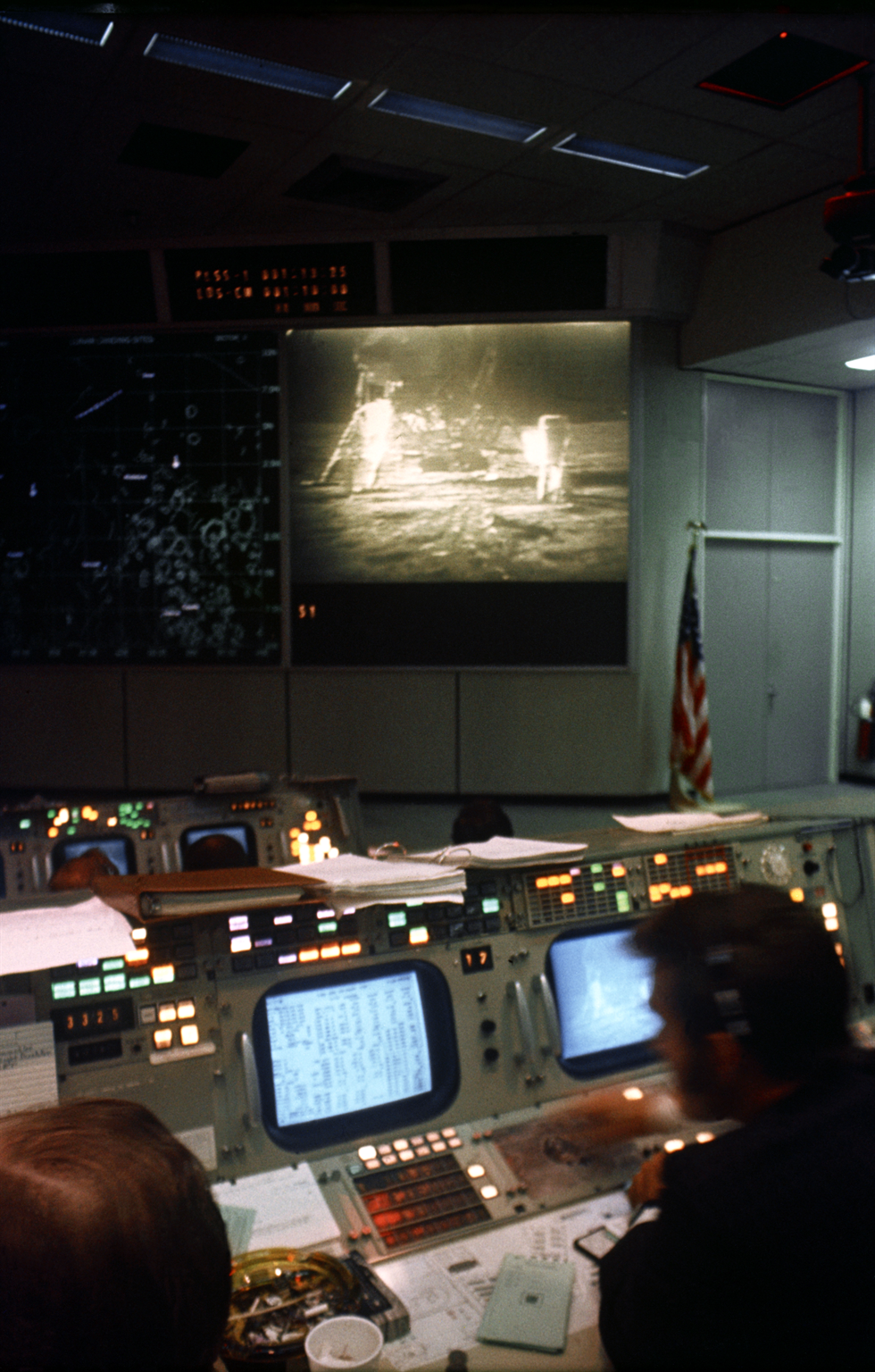 Interior view of the Mission Control Center during the Apollo 11 lunar spacewalk. The TV monitor shows astronauts Neil Armstrong and Buzz Aldrin on the surface of the Moon. Image Credit: NASA 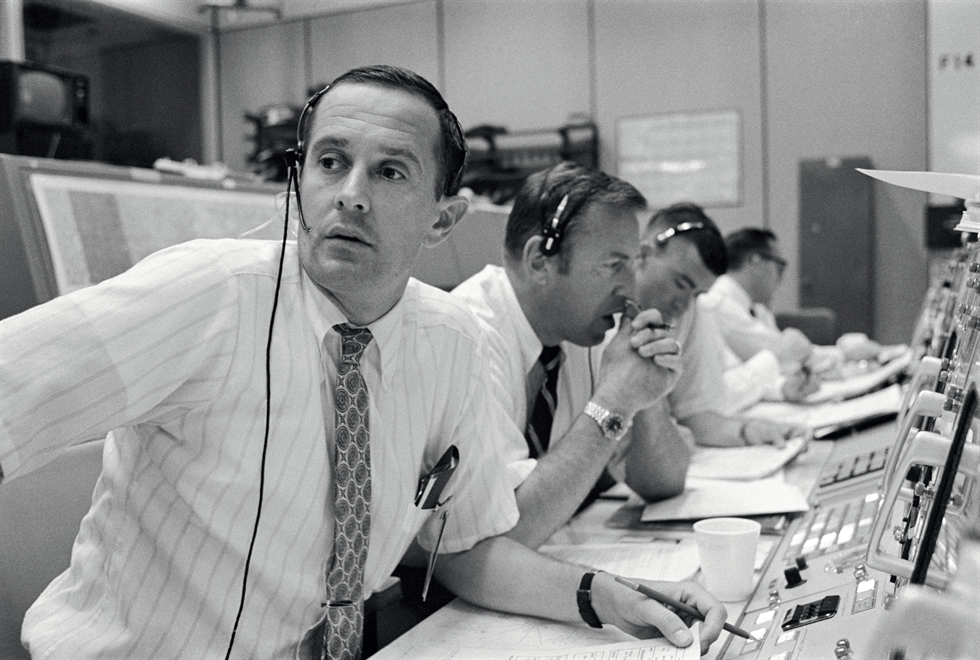 Spacecraft communicators are pictured as they keep in contact with the Apollo 11 astronauts during their lunar-landing mission on July 20, 1969. From left to right are astronauts Charles Duke, James Lovell and Fred Haise. Image Credit: NASA
Previous Article
Next Article